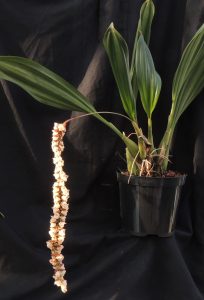 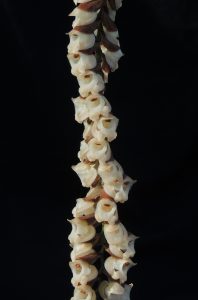 Many of our orchid species have small flowers but many of them such as Pholidota pallida compensate with very large numbers of flowers. This species produces globular flowers very reminiscent of a pearl necklace.

Pholidotas pallida is native to the eastern Himalayas and South East Asia. In Sikkim, Arunachal Pradesh and Laos we have found Philodota species to be amongst the most abundant orchids present in trees along roads in a band from 500m to 1500m. However, these species are not well represented in collections as some of them can be rather untidy.

Pholidota pallida is not one of the untidy ones, it is a relatively compact plant with attractive grey green pseudobulbs and long flower spikes with small but intriguing flowers that spiral around the spike like little white snowballs.