Have you ever wanted to know about bee orchids? Izzy, from Portland, found her first Bee orchids this year and has written a research paper for people to read, and learn about these amazing native flowers: 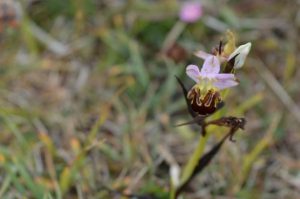 I ‘m writing about the bee orchid to say how amazing the bee orchid really is. I saw my first Bee orchid on the cliffs near our house on Portland and I nearly screamed at my Mum I was so excited because we had been looking for the bee orchid for ages and I finally found them! We saw five.

Where can you find them in the World? They grow in Europe as well as North Africa and the Middle East but its most common in the Mediterranean region.

What conditions do they need?  It needs bright light or slight shade. It grows in grassland, on limestones, open woodland, chalky soils, and sand dunes. I found them by the cliffs on Portland and Portland stone is Limestone which is chalky. Bee orchids rely on a symbiotic relationship with mycorrhizal fungi (which means they help each other and get help them grow from working together) to get nutrients from the soil.

What type of orchid are they?  The Bee orchid is a perennial herbaceous plant (which means they live more than two years) which grows from a big thick stem and grow into the ground (terrestrial). They grow 15-20 centimetres and 6-20 inches high.

What flowers does it have? It grows about twelve little flowers that are the same size as little moths with a stripy, brown, yellow and white lip with green tops attached to the pollen to make them like female bees but with purple rosette wings which I think is lovey.

Bee orchids, why are they important? Apart from having really amazing flowers, because of the symbiotic relationship with mycorrhizal fungi they tell us how the soil is. If there are Bee Orchids then there is less pollution because they are very sensitive to chemicals which would kill them so I think we should look after them.