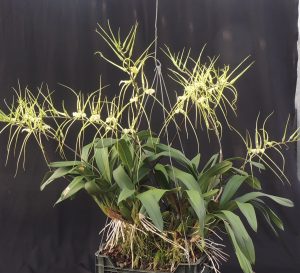 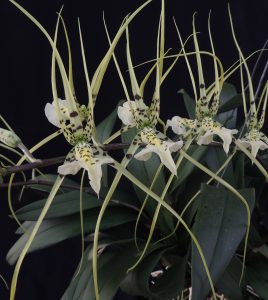 As you probably have seen many of our plants are enjoying film star status at the Aardman Studios in Bristol for a wildlife film. Brassia verrucosa has just returned from the studios with its wonderful large flowers. Remarkably research suggests that the flowers are spider mimics and are pollinated by a spider hunting wasp that attacks the flowers. Isn’t evolution spectacular?

The plant is native to Mexico, Guatemala, Honduras and Nicaragua, as well as Venezuela and grows as an epiphyte in seasonally wet forest from 900 to 2400m. For us the species does best in Warm Americas where it is hung up for good light but is kept really wet during the summer growing season to build up the massive pseudobulbs that deliver the long arching sprays of flowers.