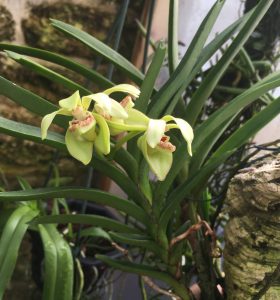 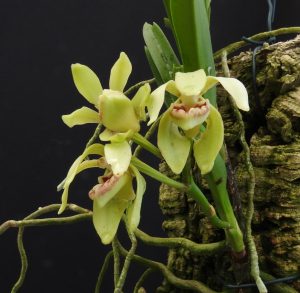 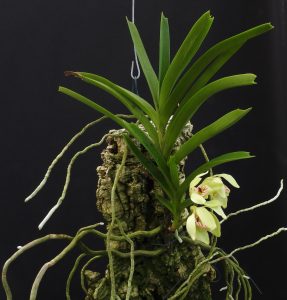 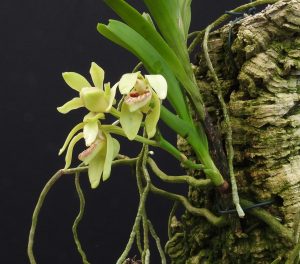 Our fourth Vanda in a row is Vanda pumila, a small growing species with very long lasting fragrant waxy flowers.

We have seen Vanda pumila in Sikkim, growing on roadside trees at around 300-500m altitude alongside Vanda ampulacea. It grows in exposed positions in good light and survives the dry season (winter) with its thick leaves and abundant fleshy roots. The climate is hot wet summers with dryer, cooler winters and we replicate this by moving the species  around the greenhouse with the seasons. (see our culture page on growing warm asian orchids for more details)

It enjoys warm conditions and we grow it with a minimum of 20C though it can take a little cooler in the winter.

The flowers have just opened and are a green/yellow with red markings, but the flowers will soon fade to a cream colour as shown by last year’s flower (below) on the same plant. 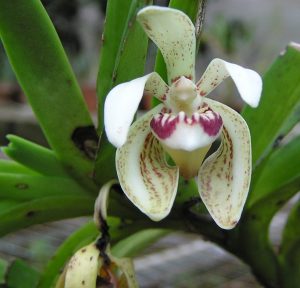 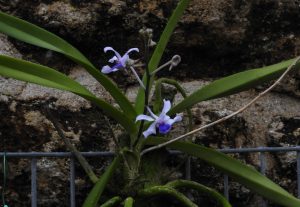 We are continuing our Vanda theme with our third Vanda species in a row. 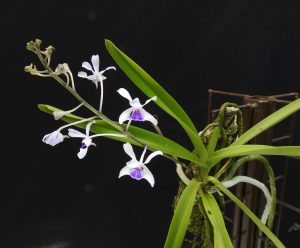 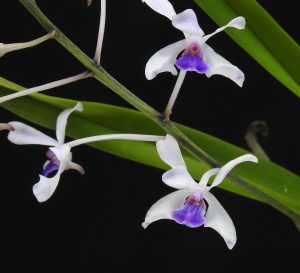 Vanda coerulescens is native to dryish monsoon forests in the Western Himalayas (Arunachal Pradesh), Myanmar, Thailand and Southern China from around 300 to 1200m. This is a habitat that we know well and have seen in Arunachal Pradesh consisting of open, bright, forest with a distinct wet season in the monsoon summer. Orchids here grow without any moss around their roots and we find that the species does best mounted on cork bark, where it can really dry out between daily waterings. Plants grow new leaves and roots in the summer and do very little during the winter before sending out the fast growing flower spikes, and flowers, each April. 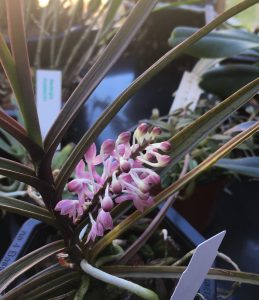 Our second Vanda in a row is a delightful miniature. Our largest plant (above) is now 12cm tall and has a mass of flowers opening on a 5cm spike.

Vanda christonsoniana is native to Vietnam where it grows in seasonally dry forest from sea level to 700m altitude. We have explored similar habitat in Laos and this forest is deciduous and semi-deciduous meaning this orchid has adapted to cope with bright light and dry periods. The leaves are almost terete and turn a red/purple colour when enjoying good light.

The sweet little flowers are on short spikes and are butterfly pollinated with a long spur. The plant here is in a 1/3litre basket which we find ideal for growing lots of miniature orchids. 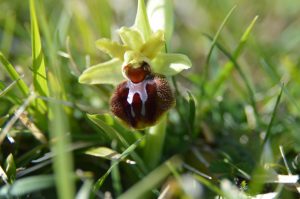 A big thank you to our Dorset volunteers Izzy and Stephanie for searching the Purbeck cliffs near Dancing Ledge and spotting the first native British orchids flowers of 2022 – Ophrys sphegodes or The Early Spider Orchid.

If you are heading that way, the Early Spiders will be in flower for about 3 weeks – and keep an eye out for Early Purples and Green Winged Orchids that are never far behind. 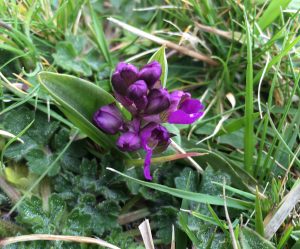 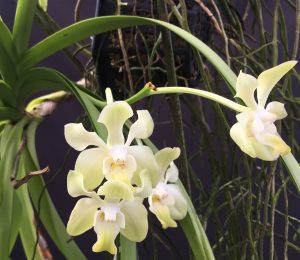 Welcome to Vanda weekend – all of a sudden our greenhouses are full of flowering Vanda species (lucky us). We will be taking most of them with us to the Glasgow Orchid Fair (23rd and 24th April) so that others can enjoy them too.

Our first Vanda is Vanda denisoniana that flowers with us every April, just as it does in its native Laos. 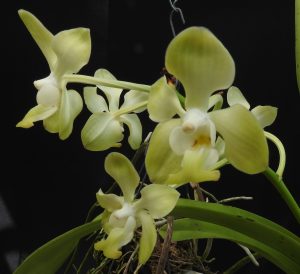 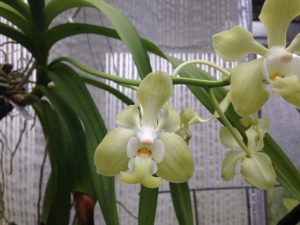 All of our plants have been grown in our school laboratory from seed collected from cultivated plants in Luang Prabang, Laos, in 2006. We found plants growing in a back street in this wonderful city (a world heritage site) and were struck by the beauty of these subtle flowers. 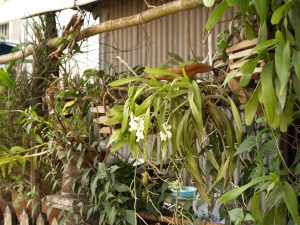 The plants had ripe seed and a small quantity collected was sown back at school in 2007. The majority of the seedlings were returned to Laos when we visited and helped Souk and Eddie set up their laboratory in Paksong in 2011 but a few were kept to grow a permanent seed source at Writhlington.

The plants have grown well but slowly and have been flowering every year since 2017. We grow the plants in baskets that allow their extensive roots to hang freely in the air. We spray plants daily throughout the year.

The species is found in primary forest from 450-1200m from Southern China, Burma, Thailand, Vietnam and Laos. It is probable that the plants in Luang Prabang originate from the still heavily forested North Eastern Laos. The flowers have the added benefit of being beautifully fragrant in the evening.