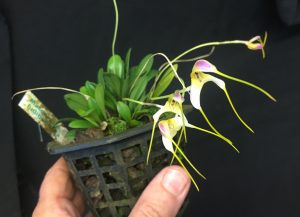 We haven’t featured this wonderful little masdevallia species since 2019 which seems very remiss of us. 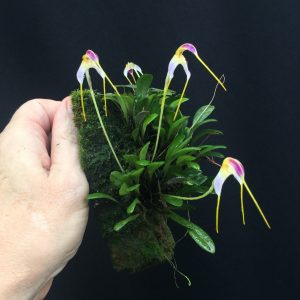 Masdevallia ludibundella is a miniature masdevallia with large dramatic flowers. The species comes from Colombia and enjoys the cool wet conditions that most of our masdevallias enjoy in the Cool Americas section of the greenhouse.

The flowers are long lasting and held well clear of the leaves. Given conditions it likes the plant multiplies but is quite slow to make specimen plants.

We grow the species mounted and in pots. As long as it is kept well watered it doesn’t seem to worry. 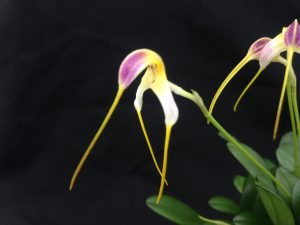 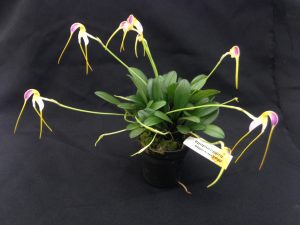 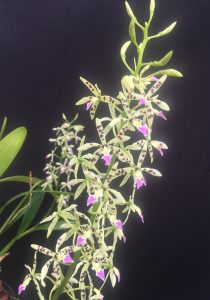 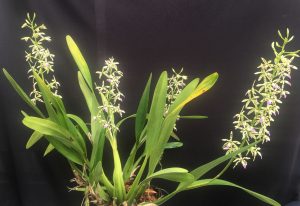 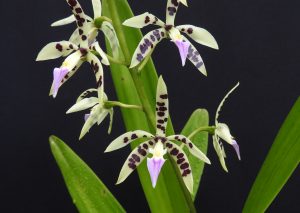 Prosthechea prismatocarpa is a large growing member of the cattleya family. The species produces long spikes of dramatic flowers that are butterfly pollinated with the pink section of the lip the perfect shape for a large butterfly to grab hold of.

We have seen Prosthechea prismatocarpa growing in Costa Rica where we found it in tall remnant trees on cloudy ridges at around 1500m. The trees had Masdevallia rolfeana growing on their trunks and, not surprisingly, we find that the two species do well close to each other in our Cool Americas section but with Prosthechea prismatocarpa growing a little brighter and dryer as it grows higher in the Coata Rican trees.

We have two varieties of the species; the clone above is Prosthechea prismatocarpa ‘Writhglington’ which has larger  ‘tall’ flowers, longer spikes and darker markings than the more usual variety below with slightly smaller, ‘wide’ flowers and a more spreading habit. 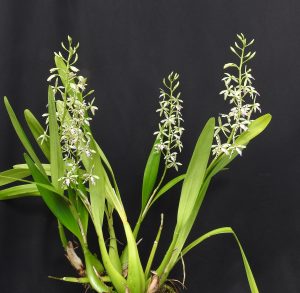 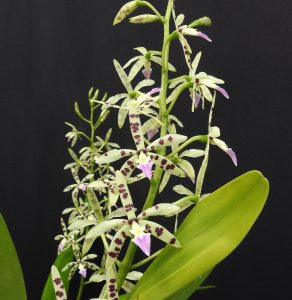 Here are the two flowers next to each other for comparison with “Writhlington’ on the right. Both clones are now in full flower. 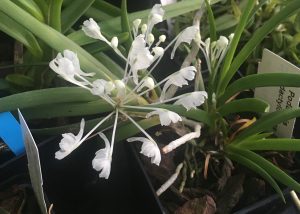 We have some lovely small growing African orchids including this floriferous species.

Podangis dactylocras, a small fan shaped species widespread across tropical Africa from Angola in the south to Sierra Leone in the West and Tanzania in the East.

The moth pollinated flowers are white (a common character in African orchids) and produced on short spikes from the axils of the pointed leaves. Flowers are 6mm across and have a 1cm spur with an unusual flattened tip that reminds us of a fish’s tail.

Plants enjoy a warm shaded spot and respond by producing multiple growths that in time will give a mass of flowers. 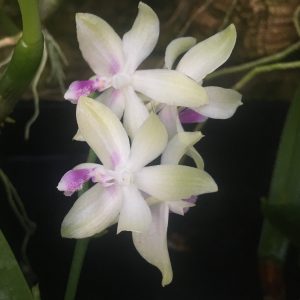 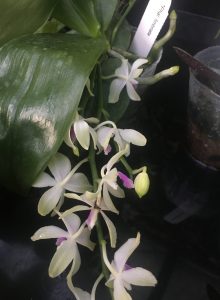 Phalaenopsis fimbriata is on of our Sarawak species and reminds us of the wonderful mountain forests we explored there in our 2019 expeditions.

Phalaenopsis fimbriata is reported growing on semi shaded limestone cliffs between 790 and 1300m. We came across this special habitat in Mulu National Park and found Paphiopedilum sanderianum growing near the top of cliffs shaded just by the tops of nearby trees. (below) 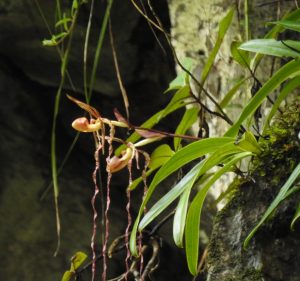 Phalaenopsis fimbriata produces pendulous flower stems – ideal for its habitat – and we will move the flowering plant into a basket as it grows larger to make the most of this habit. We grow the species warm (min 20C) although its habitat suggests that it could take it a little cooler. 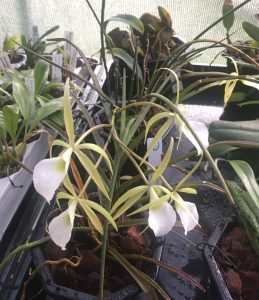 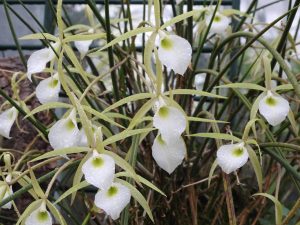 Brassavola tuberculata  is a terete leaved relative of Cattleya and native to Brazil where it grows in warm open forest in good light. It is relatively slow growing and we find it does well mounted or in a basket with perfect drainage. We find it dislikes pots because the roots cannot tolerate prolonged wet periods. Saying this we find that the species enjoys being watered daily and when we have with held watering at flowering time the flowers have not opened fully – so mounted but well watered seems to be its preference in our greenhouse.

In 2018 it won Best Trade Species at the Malvern show, an RHS Cultural award, and won RHS Orchid of the Year 2018. 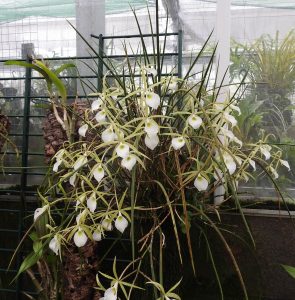 The species is a classic moth pollinated orchid with flowers that are fragrant at night and the right pale colours to stand out in the dark forest.