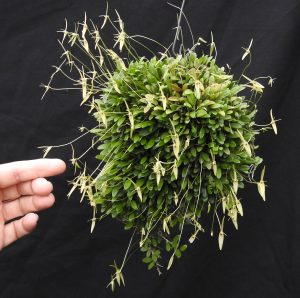 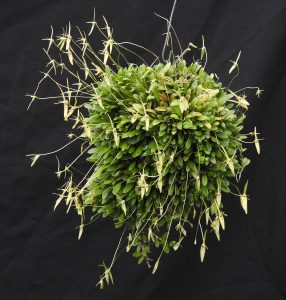 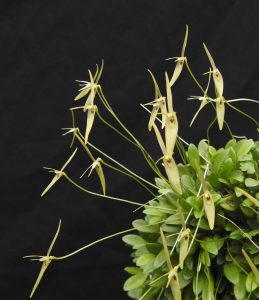 A great way to start the new school year is with this wonderful miniature orchid species – though this plant has been on its cork mount for about ten years has turned into a ‘giant’ miniature orchid!!! 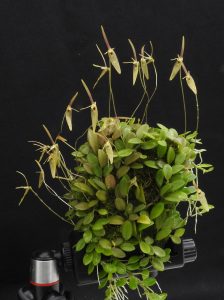 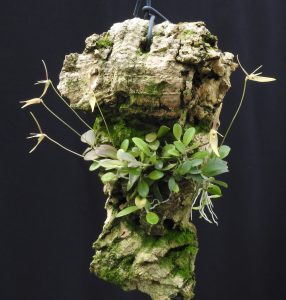 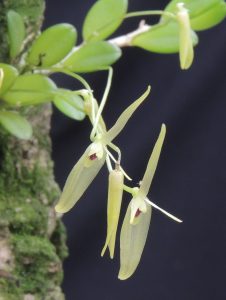 Though these other plants in flower show that it also flowers as a tiny plant.

Barbosella australis has 5mm leaves along a creeping rhizome and relatively large flowers single produced in profusion. Barbosella australis is native to Southern Brazil (australis means ‘southern’ and doesn’t refer to Australia – the southern land) and we have seen related species in Brazil at around 1200m in primary forest where a colony can clothe the lower branches of a tree. The species produces a profusion of flowers from both new and older leaves.

This species propagates relatively easily and so we have lots of these stunning plants flowering this week – look out for some of them this autumn.

We find that the only way we can grow this species well is mounted on bark where it can grow where it wants and eventually surround the cork mount as our plant has here. We spray our plants once a day. In pots, plants become overwhelmed by moss. 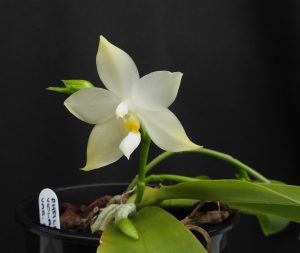 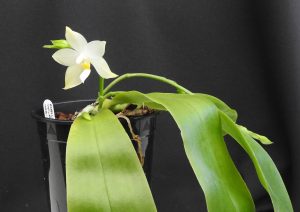 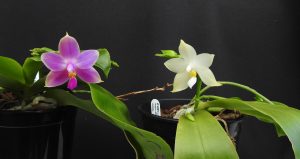 Phalaenopsis violacea is native to Malaysia, where it is native to hot lowland forest in shade. The species produces flowers successively on a spike over many years and we are looking forward to many years of glorious flowers from our alba variety now that it has started to flower. The large, glossy, undulating leaves are also attractive – a lovely species.

As the plant matures it produces more and more active flower spikes and so can produce a fantastic display of flowers from several years worth of spikes.

Experiments in double glazing a greenhouse for warm orchids. 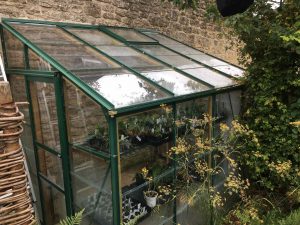 This summer I have converted our non-orchid greenhouse (used for propagating garden and overwintering garden plants) into an orchid house for warm growing species. Top of my agenda has been energy efficiency and so I have been looking at different double glazing options.

Perspex seemed an obvious choice but quotes suggest over £1000 for this 8ftx6ft lean to greenhouse – crikey! no thanks. I have opted for 1mm flexible clear PVC sheet – for less than £200 – which is a little harder to work with but looks promising. 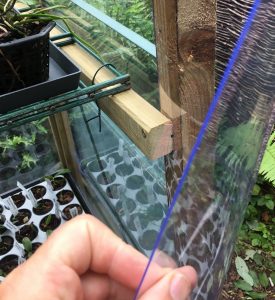 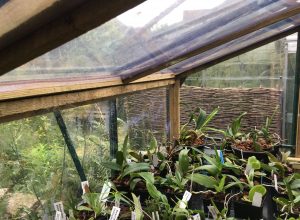 The sheet is properly clear (I will let you know how long that lasts) and relatively easy to fit. I have lined the greenhouse in treated softwood batten (mostly free offcuts from a nearby sawmills) stapled on the PVC sheet, and then sealed with a second layer of battens. The sheet is commonly used for energy saving industrial draught curtains, so it makes a great secondary strip door on the greenhouse too.

I am keeping the greenhouse at 18C and will let you know how the experiment goes this winter. With double glazing and the warm west facing wall I am hoping for minimal energy use, offset by the solar panels on our roof. 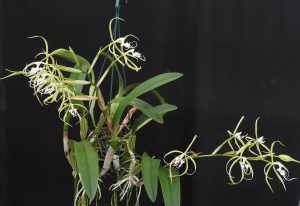 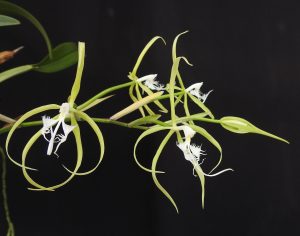 This lovely orchid looks very much like a cattleya when not in flower, but when the flowers open there is no confusing the green and white moth pollinated flowers of an epidendrum.

This species is found right through Central America and down through Colombia, Ecuador and Peru. Out of flower it looks very like a uni-foliate cattleya but soon shows it’s unique character when the flower spikes appear. Spikes produce up to six large flowers evolved to attract a moth pollinator although it offers no reward and in common with many orchids relies on deceit pollination. Some interesting research indicates that the species produces a variety of scents presumably to aid with deceit pollination.

The flower morphology suggests that it is pollinated by large hovering moths as there is no landing platform and the protruding hook at the front of the lip would prevent smaller moths from reaching the nectary.

The species is found high in trees in warm forest from 500-1000m altitude and we find that the plant succeeds well mounted or in baskets of course bark where it can dry out rapidly between watering. In pots we have found it prone to rot in the new growth from being kept too wet. It also enjoys bright light.

Time to remove your shading? 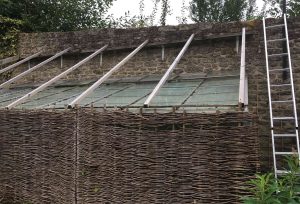 Today I have removed the shading from my cool greenhouse at home. Unlike the school greenhouse with it motorised shading, I like most people have two options for my home orchids – shading on all the time or shading off.

This year my shading went on in April (below) but I am now keen to get some of that early autumn light to my plants before the dark days of winter. 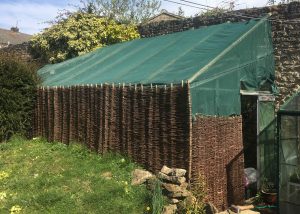 You will notice that my greenhouse is a lean too against a west facing wall so people with greenhouses in full sun may need shading for a little longer to avoid very high temperatures (if the sun returns). You will also notice that I have wooden supports for the shading well above the greenhouse, this ensures that the shade has a full cooling effect for our cloud forest cool species inside.