So after a long hard day of work at Hampton Court, the display is mostly up and looking brilliant. We had a really fun setup and are all pleased with how its looking. Just a few finishing touches to add tomorrow. It’s going to be a really really good show! Look forward to seeing you there! 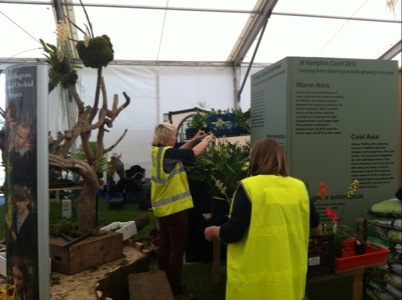 Students get to know the orchids of Sikkim

The next Writhlington expedition to Sikkim is in March 2013 which is just nine months away and so the students who are going are busy preparing for the trip. One important task is getting to know the orchids of Sikkim to make identification easier when out in the Himalayas. This is Devin with one of Sikkim’s most dramatic species Dendrobium densiflorum. This species should be in flower next Easter and will not be difficult to identify.

Judge trainees have a great day in Devon

Two students from Writhlington, Tom Forsyth and Jacob Coles have become the people ever to earn a place on the British Orchid Council judge training scheme.

Tom explained “We just started a process that will take about three years. During this time we will have to pass judging tests all around the UK and get involved in as much judging as possible.”

Once qualified the pair will be accredited to judge at orchid shows across the world but so far they have just been as far as Exmouth where they helped judge the plants at the Devon Orchid Society show. Jacob described the day as “A brilliant experience and really interesting. To judge well you have to be really observant and also have a good knowledge of what each plant is capable of.”

Tom and Jacob also helped to put on the display for the Somerset, Wiltshire and Dorset Orchid Society and were rewarded with a number of rosettes and cups for plants grown at Writhlington? 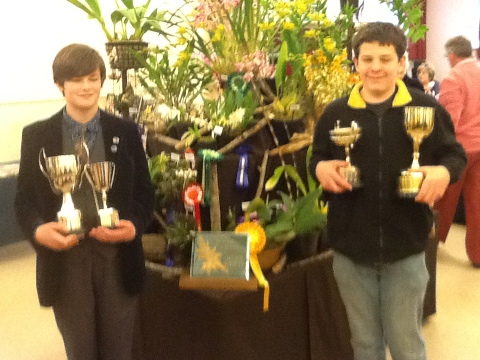 Best Writhlington display of all time? 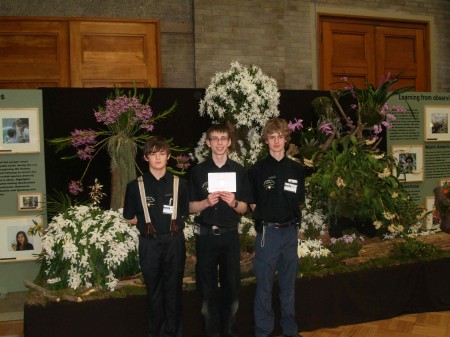 After a very successful London show including a gold medal from the RHS, best specimen plant for our Dendrobium mobile (the big pink one on the left at the back) and a total of three Certificates of Cultural Commendation (we have never had more than one a a single show before) we are asking the question: Is this the best Writhlington display ever? We would love your opinion.

It’s now time to start looking forward to our other shows in 2012. These are:

We hope to see you at these events and will being doing our best to keep up our display standards. Who knows? we may even do a better display than last week’s effort in London.