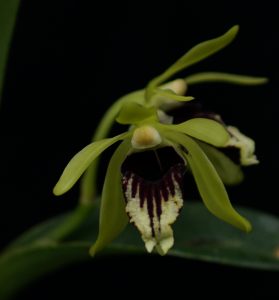 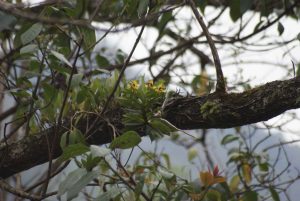 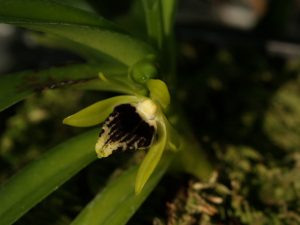 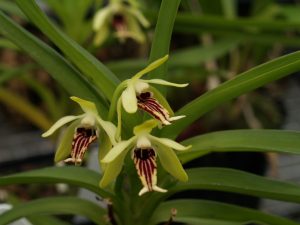 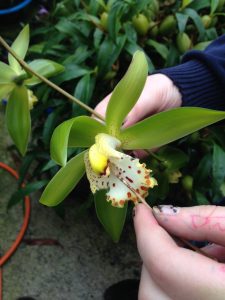 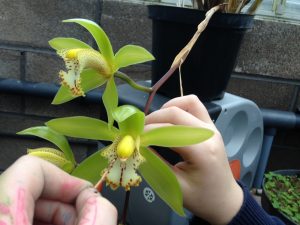 Thanks to everyone who voted – it was a close thing but January’s winning orchid is the wonderful species from Sikkim, Cymbidium hookerianum. As the photos above show we have now cross pollinated our two clones of Cymbidium hookerianum by taking pollen from the slightly larger flowered plant on the left and placing it onto the smaller flower on the right. Students took it in turn to pollinate three flowers and so we can expect about six million seeds in twelve months time and  plants for sale in flask from about 2019 onwards.

The pollen looks very fresh and healthy and, as you can see below, Cymbidiums produce two large pollinia on a short stipe ending in a sticky pad called the viscidium. Hand pollination is straight forward. The stick acts like the pollinating bee and when it is pressed against the viscidium it attaches firmly to the end of the stick and we can move the pollina across to the stigmatic surface  of the flower which will develop the seed pod. We will keep you updated on the seed pod as it develops. 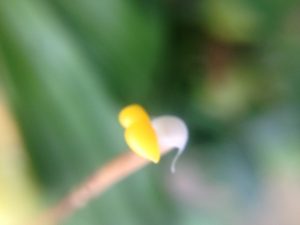 Not all orchids have two pollinia. We also pollinated Cattleya coccinea (which came second in Orchid of the Month) and this species has eight pollinia (photo below). This time the stick acted as the beak of a humming bird. 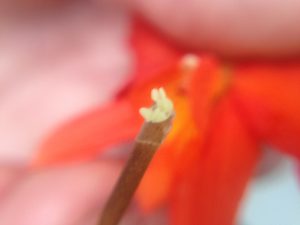 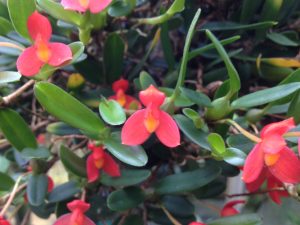 Maxillaria sophronitis is a humming bird pollinated species from wet forests in Colombia and Venezuela. It is found from 750m to 1500m altitude and so we grow it in our Cool America section.

The species’ adaptation for humming bird pollination is interesting. As well as the usual red/yellow flowers to attract a humming bird it has developed a growth habit where it forms a ball but always presents its flowers on the outside of the ball to give easy access for hovering birds.

We have two very distinct clones of this species. The one in flower now is small growing with 4cm leaves and 1cm flowers where as the larger growing clone has leaves and flowers approximately double the size. 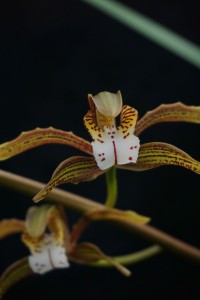 Today’s Orchid is another Cymbidium from the Sikkim Himalaya. Students on our school expeditions to Sikkim have seen this graceful species growing in large evergreen trees  at around 2000m altitude around Gangtok and in Southern Sikkim near Tinkitam.

Cymbidium erythraeum is a lovely orchid when not in flower due to its long thin dark green leaves. The flower spikes emerge in the autumn and the long lasting flowers are a treat throughout the winter.

Our biggest plant is now quite a specimen (it nearly hides Joe in the photo) and it has five long spikes each with more than twenty flowers. This is our tall growing clone. We also have clones which produce shorter leaves and shorter spikes than this clone but these are equally as graceful and worth growing. 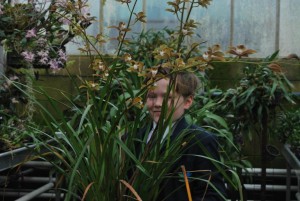 We grow this plant close to our Cymbidium hookerianum plants with a winter minimum of 6C and vents that open at 10C so it grows really cool. We keep it very wet in summer with plant food in most waterings. In the winter we keep it damp and never let it completely dry out.

Vote for orchid of the month – January