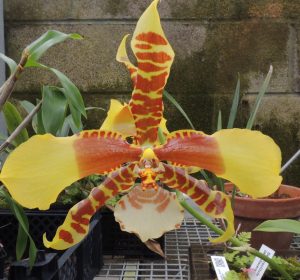 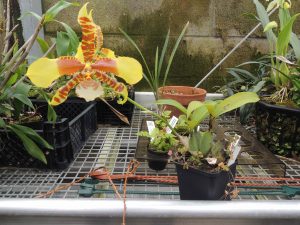 This is the clown orchid. A cool growing species from Mexico, Guatemala and Belize where it is found in deciduous forest from 1400 to 2700m where it experiences shady wet summers (leaves on the trees) and cool dry bright winters (leaves off the trees)

For us the species does best in Cool Asia where many of our Himalayan species come from a habitat with similar conditions. According to older orchid books this was once a common beginners orchid in collections when wild plants were unsustainably collected for horticulture. It is a surprise that seed raised plants are not more widely available – we will be pollinating this plant for seed later today.

If you look closely you will spot the little striped clown at the centre of the flower. 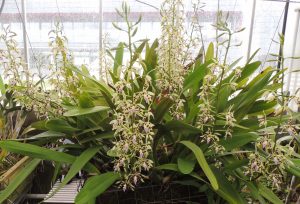 This wonderful species from Central America is a large growing member of the cattleya family that produces long spikes of dramatic flowers. These are butterfly pollinated with the pink section of the lip the perfect shape for a large butterfly to grab a hold. 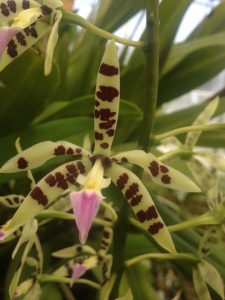 We have seen this species in tall remnant trees on cloudy ridges at around 1500m altitude in Costa Rica.

We have had this plant since 1995 and it has become a huge specimen in Cool Americas but it is time we split it up so look out for plants next year. 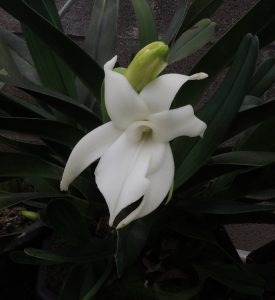 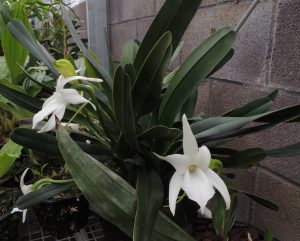 This species from the mountains of central Madagascar is one of our most rewarding orchid species. The large waxy, pristine white flowers are wonderfully fragrant and currently fill its section with their intoxicating scent.

The plant’s natural habitat is in leaf litter amongst quartzite boulders but we find the species enjoys a mossy basket where its roots remain damp and cool. Most of our Angraecum species are warm growing but Angraecum magdalenae does best for us in Cool Asia (minimum 10C) where it is slowly growing into a real specimen and this year it has six flowers which contrast beautifully with the dark green leaves.

We have tried to produce seed from self pollination but been unsuccessful and so if anyone would like to exchange pollen we would be very happy to try for seed again. The flowers hold their nectar in long curved spurs suggesting pollination is by large moths. 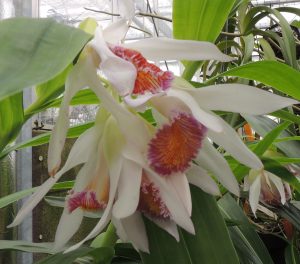 Thunia species are native to the Himalayas where they grow long pseudobulbs during the monsoon and then drop their leaves once the dry season starts.

We have seen Thunia alba growing on the side of mossy boulders in shade near the road from Kalimpong (West Bengal)  to Gangtok (Sikkim) at around 500m altitude where they will experience very little rain from Novemeber to February and constant wet from April until September.

At school we put the Thunia pots up on a shelf where they will be completely dry once the leaves have dropped in November. In February we repot into fresh compost and slowly introduce watering avoiding getting too much water on the foliage until the plants are growing strongly. 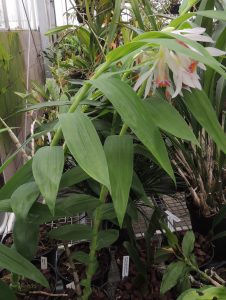 It is fair to say that there is some confusion over the naming of Thunias as once seperate species Thunia alba and Thunia marshalliana are now considered synonymous.

Getting ready for our Orchid Festival this Saturday 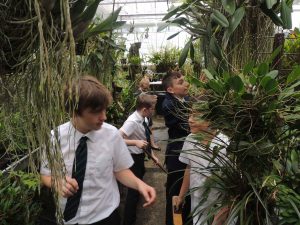 It is all hands on deck this week as we get ready for the orchid Festival on Saturday. The greenhouses are nearly ready for visitors, the lab is will be full of activities, the new Mendip building will be filled with displays, wood carvers and brilliant lunches and refreshments – we can’t wait. Do come and join us.