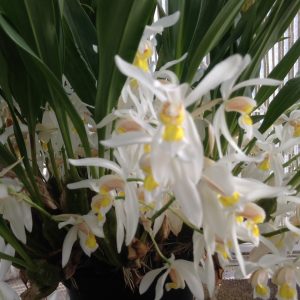 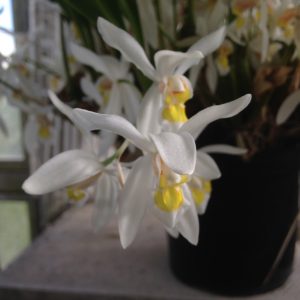 This is a cool growing species that we have seen abundantly in Sikkim and in Arunachal Pradesh. In our experience it grows in evergreen and semi-evergreen forest from about 1000m up to 2500m mostly on the trunks and lower branches and often with moss and ferns, The photos below show the species flowering in late April near Tawang right in northern Arunachal pradesh. 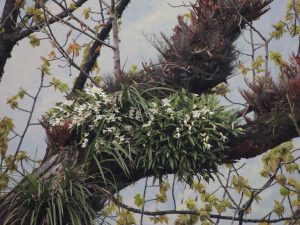 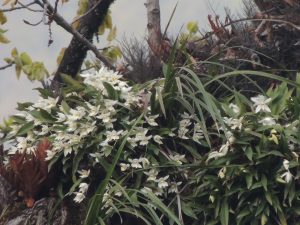 In cultivation we replicate the species’ cool wet habitat and find it grows best with a minimum of 6C in our Warm Temperate zone and we water well throughout the year. 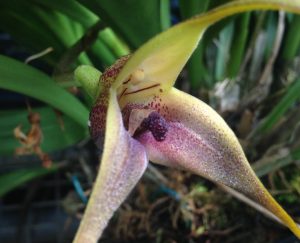 Hi Ed here. This is my favourite orchid because although it smells quite bad it looks very interesting. I like the colouration when it is in flower and the smell reminds me of durian. The stink of the flower is there to attract flies that then pollinate the flower.

Masdevallia hystrix grows in Ecuador at around 2500m in cool evergreen forest. We have noticed that its leaves are easily damages by bright summer sunshine or high temperatures so cool and shady is where it likes to grow. 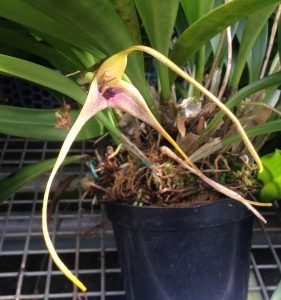 The flowers are large with a spam of 15cm from the tips of the tails. Lookout to for the prickly lip that gives the species its name. Hystrix is latin for porcupine! 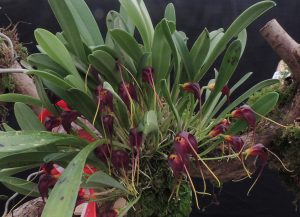 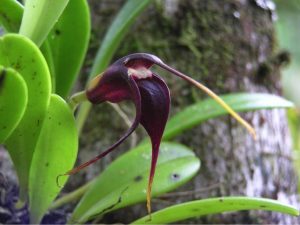 The photo shows the mossy trunk that was covered in Masdevallias. The temperatures here go down to a minimum of around 12C with no distinct dry season. We grow the species both mounted, like the plant at the top which was an award winner at the Malvern Show, and in pots. We spray plants daily.

We are often asked about black spots that appear on Masdevallia leaves and it is interesting to note that wild plants have these spots on older leaves too. One of the reasons for black spots in our greenhouse is excessively high temperatures causing heat stree in the leaves so dont forget to shade plants and keep them well watered when weather is like our current hot spell. 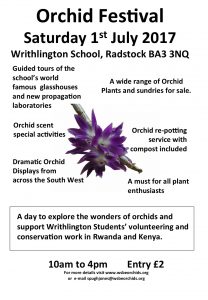 Don’t miss our next public event – a special day planned and the first opportunity to see our new Mendip propagation labs in action. 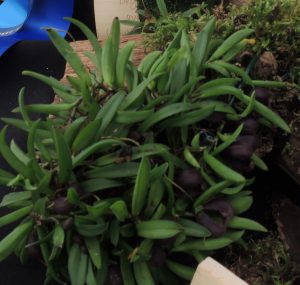 This remarkable species is pollinated by ants and as result has flowers tight to the bark it grows on with just a small opening at none end just big enough for and ant.

The species is native to the Mata Atlantica in Brazil where it grows in cool cloud forest presumably surrounded by ants.