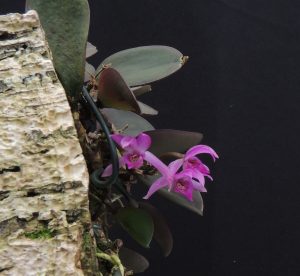 This little miniature from Central America hasn’t features in 365 days since 2019. 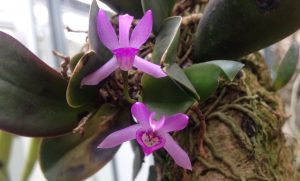 Meiracillium trinasutum is a small growing member of the Cattleya family and the name means three nosed Meiracyllium which we rather like.

The species is native to Mexico and Central America where it grows on trees and rock at around 1000m. Its habit is to cling tight to its mount and so we would definitely grow it mounted rather than potted and having tried it in a number of sections finds it does best in our Warm Americas section in good light, lots of air movement and spraying daily. 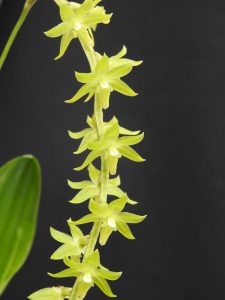 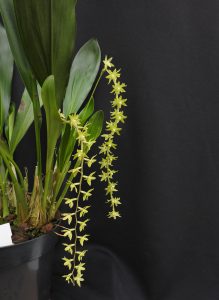 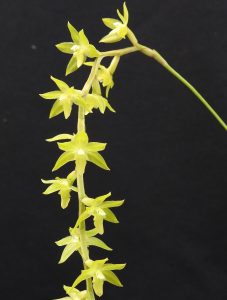 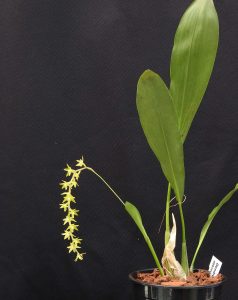 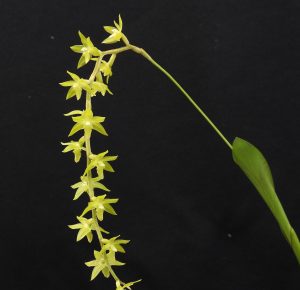 The Summer and Autumn are our peak seasons for flowers on our dendrochilums. While most orchids flower from mature growths there are some like dendrochilums that flower with the new growths in our warm Asia section we have dendrochilum spikes showing on many species.

Dendrochilum abbreviatum has very large (for a dendrochilum) flowers and beautiful green and yellow coloration, making this a very striking orchid. The name Dendrocilum abbreviatum  means ‘The short dendrochilum’ and I guess that this may refer to the relatively short inflorescence compared to similar species. The species is endemic to Java and is reported (in the excellent book ‘Orchids of Java’ by J.B.Comber) to be found growing as an epiphyte in primary forest from 700-2000m. We grow the species in shade in our Warm Asia section (min 17C) which approximates well to the natural environment, and we keep all our dendrochilums well watered throughout the year, and especially wet when in active growth each summer. 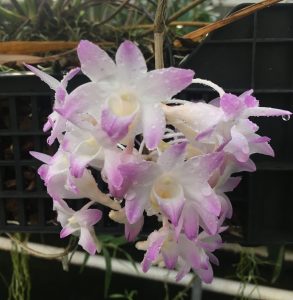 As the term comes towards its end I have decided that Day 2000 will make a fitting end to 365 days of orchids so we are on the count down with nine more after today. For Day 1991 we have our dendrobium with the longest pseudobulbs. 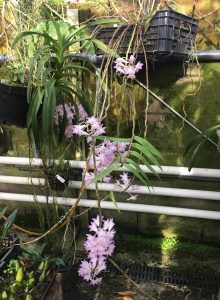 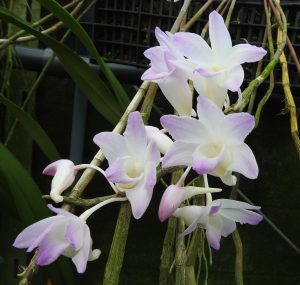 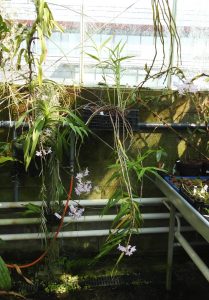 Dendrobium fairchildiae is native to the Philippines and one of the stars the Warm Asia section of our greenhouses. The long pseudobulbs become pendulous and deciduous before flowering over a period of several years. This display is even better when the plant musters several flowerings during the year.

The flowers are produced simultaneously on old bulbs aged from around two to five years old and form clusters near the end of the bulbs. The flowers are large (5cm across) and attractively splashed in pink. This week we have a record equalling six pseudobulbs flowering together.

The species is reported as growing on exposed rocks above 1200m but we find it does best in a basket hung high in Warm Asia so that the long pseudobulbs can hang freely. Its basket is a mushroom tray and it enjoys lots of water throughout the year. 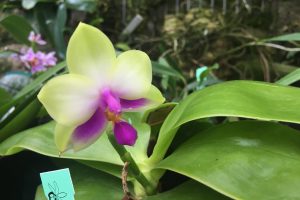 This phalaenopsis means a lot to us as Phalaenopsis bellina is Sarawak’s state flower. We have several clones including the one above which is just in flower in the greenmhouse (min 20C) and the one bellow that grows indoors. 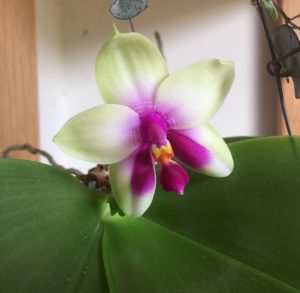 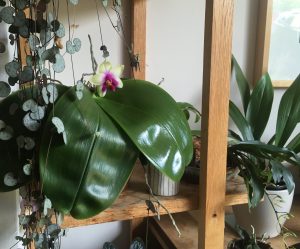 As usual for this time of year the indoor plant is filling my dining room with its strong rose fragrance. (yes it is unmistakably smells of sweet roses). As a plant that enjoys deep shade and warm temperatures it is well suited to indoor culture. It is on shelf facing bifold doors with an to the garden facing East. 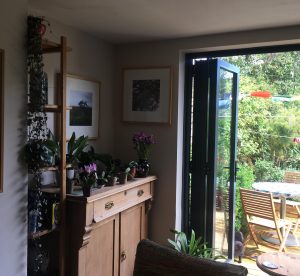 This phalaenopsis species is found across Borneo and it grows it hot lowland forest in swamps or near rivers. Plants grow low in trees where it is often in deep shade. The species grows very attractive large undulating leaves and flower spikes that produce large fragrant flowers successively over a long period so the plant will be in flower now until late in the autumn. 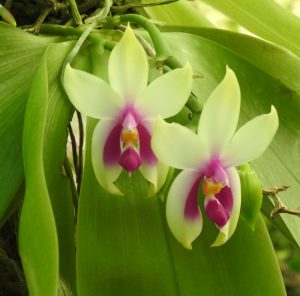 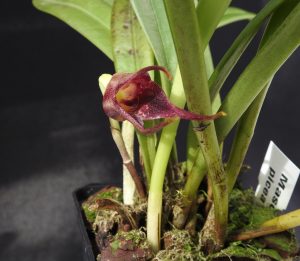 The current warm weather is bringing out the scents from all our orchids (scents are volatile chemicals that evaporate and so spread through the air much more effectively in warm air) whether those scents are lovely – like last weekend’s Prosthechea radiata or putrid like the scent of Masdevallia picea. 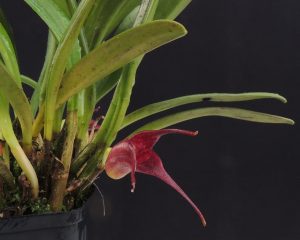 This species is loved by the orchid project students for its foul smell.

Masdevallia picea is native to cloud forests in Peru at around 2700m altitude where its large deep red flowers attract fly pollinators assisted by the scent of rotting stuff – it reminds me of vomit, and not in a good way! Despite the smell it is a really intriguing orchid, and one I would not be without. As well as bing large and attractive, the flowers are waxy and long lasting – and of course a real talking point when we have visitors.