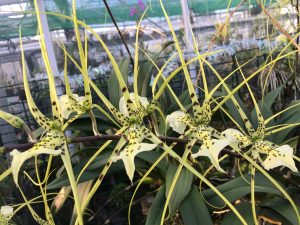 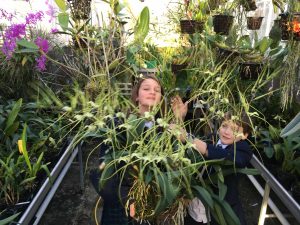 We have made it – 365 different orchid species, one a day, blogged when in flower in our collection. During the year we have had over 33,000 visits to our website as well as our followers on Twitter and Facebook so we do hope that you have enjoyed the journey as much as we have at school.

Please let us know what you have enjoyed and any requests for next year. We have already had lots of people asking us to continue and we will be carrying on in 2018 with an orchid a day although some of them will be species that featured in 2017.

365 days has been great for the orchid project as we now have a really good data base of our orchids, we have students that have developed research skills, photographic skills and a whole lot of knowledge – a book maybe? It was also lovely at Orchid Christmas that our visitors could ask if we had any plants of …. available that they had seen on the blog, it is always worth asking.

So back to Brassia verrucosa. This species is commonly known as the spider orchid and has the most wonderful long spidery petals. It also has a relationship with a white spider in the wild. The spider hides camouflaged on the lip and catches insects attracted to the flower.

The plant is native to Mexico, Guatemala, Honduras and Nicaragua, as well as Venezuela and grows as an epiphyte in seasonally wet forest from 900 to 2400m. For us the species does best in Warm Americas where it is hung up for good light but is kept really wet during the summer growing season to build up the massive pseudobulbs that deliver the long arching sprays of flowers. Our plant this year has five spikes and as you can see rather dwarfs Naiya and Ed when they pick it up.

The name refers to the verrucose or warty lip with rather intriguing green warts on the creamy white ground. 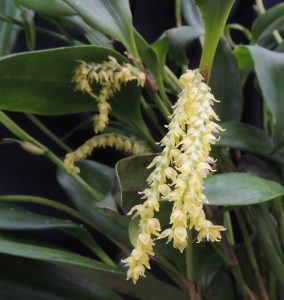 This very attractive Pleurothallis is a bit of a mystery. It was donated to us with the name baeza which is a town in Ecuador but not a recognised orchid species. We therefore assume that the species is native to the cloud forests around Baeza but any help on a positive identification would be appreciated.

The plant is robust with 20cm stems and thick 15cm leaves that produce these delightful sprays of closely packed flowers. Along with most of our pleurothallis species this plant lives in our Cool Americas section, cool and wet throughout the year.

This species is our 26th Pleurothallis species in 365 days reflecting the wonderful diversity of the genus and the general diversity of our Cool Americas section that has contributed more than double the species of any other section to 365 days. It continues to surprise me that tropical visitor attractions (such as the tropical Conservatory in Roath Park, Cardiff, that I visited last week) are kept over hot and over humid, and contain the limited diversity that appreciates those conditions. The greatest tropical diversity is in the cool and airy mountains of South and Central America, Asia and Africa. Why not make a New Year’s resolution to go and visit one of these areas in 2018. 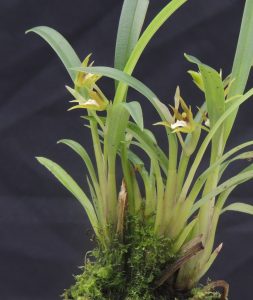 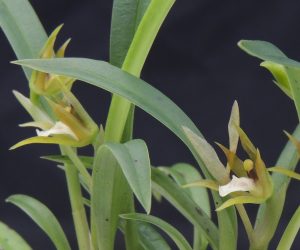 This is a miniature member of the Oncidium family and comes from the cloud forests of Ecuador where it grows in moss from 1200 to 2400m altitude. Plants grow to about 8cm high.

We find this plant does best in 3cm pots amongst miniature masdevallia species in Cool Americas where we keep it well watered throughout the year. The first picture shows the moss that naturally grows around the plant in these conditions.

The flowers are produced from maturing growths and, although small, plants quickly form clumps and so produce many flowers together to give a charming display. This is yet another example of the wonderful diversity of Orchid Species. 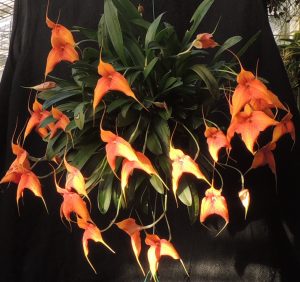 In the Orchid Project we grow a wide diversity of orchid species but we have a few hybrids that have arrived by various means. This plant was purchased as a seedling labelled Masdevallia decumana but on first flowering was clearly the hybrid between decumana and the orange flowered Nasevallia veitchiana. It is a small growing plant with very large flowers produced in profusion. We grow both the parents and it is always interesting to see how characters are passed from parent species to hybrid. Decumana has dominated on compact growth and large flowers while veitchiana has contributed most on colour. 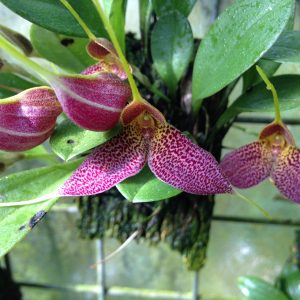 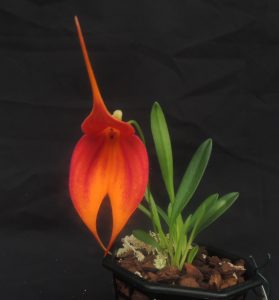 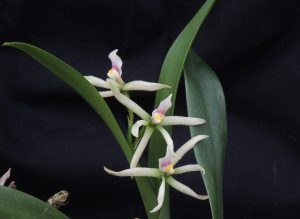 This is another very fragrant Prosthechea species. The species is native to South Eastern Brazil where it grows as an epiphyte in cloud forest. It therefore enjoys growing cool and wet in our Cool Americas Section.

This is a small plant and, as with most Prosthecheas, small plants will bloom and produce short spikes with few flowers. A fully mature plant can produce a 12cm spike with fifteen flowers.

The scent is sweet and reminds me of play-doh. Flowers are long lasting and produced over a long season making this a very worthwhile plant to grow.