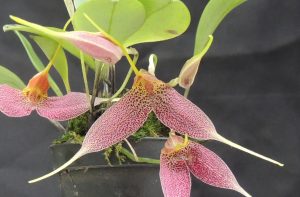 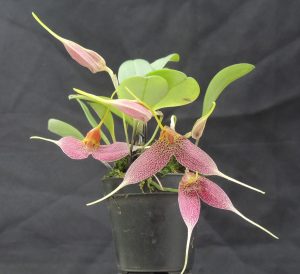 This amazing miniature species only reaches 6cm high but produces masses of large spotted flowers 7cm from tail to tail. The plant shown in our photos today is in a 3cm pot but we also grow the species mounted.

Masdevallia decumana (the name means large flowered Masdevallia) is native to cloud forests in Ecuador and Peru from 1000-2500m. We find it enjoys Cool Americas (Min 12C) where it is kept well watered all year.

The plants we split and mounted on January 1st are all doing well and so we hope to have a few plants for sale later in the year once they are properly established. 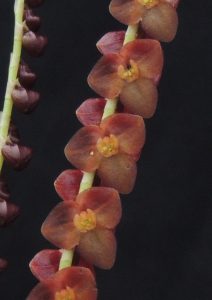 The plan is medium sized for a stelis with leaves about 20cm long and the 30cm flower spikes have two opposite rows of 10-14 flowers. Leaves flower repeatedly over many years and so mature plants produce many spikes. We find that this species flowers reliably from December through to March. 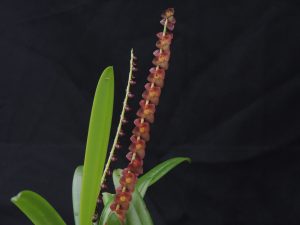 Stelis genychila is endemic to Colombia where it is found at around 2300m in cool cloud forest. 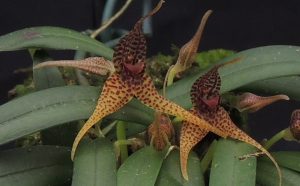 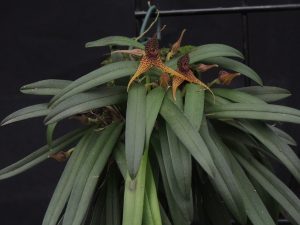 This miniature relative of Masdevallia is native to the Mata Atlantica cloud forests of Eastern Brazil. Students recorded Dryadella species on our 2005 expedition to Brazil on their trek up to Velutina ridge (the habitat of Cattleya velutina) 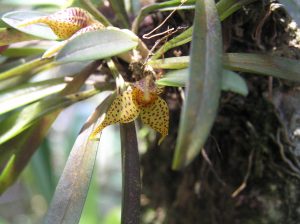 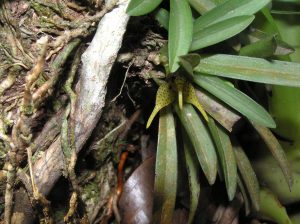 We find plants do best for us mounted but then grown in heavy shade on a north facing wall and sprayed daily. The flowers are long lasting and small can produce a lot of flowers which stand well clear of the leaves. 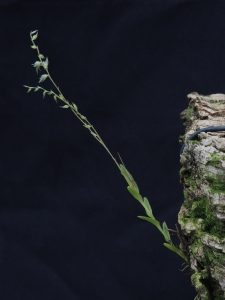 One of our tiny orchids today with flowers that really require a dissecting microscope to appreciate. 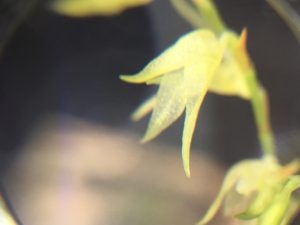 The species has a very unusual growth habit  of short stiff growths and a thin terminal spike. This is the only species of Frondaria and grows in cloud forest from Colombia to Peru at altitudes from 1300 to 3200m so it enjoys damp cool conditions although we have found it does better mounted than potted.

We are hoping that our little plant will grow as well as this plant photographed in the wild by Ecuagenera. 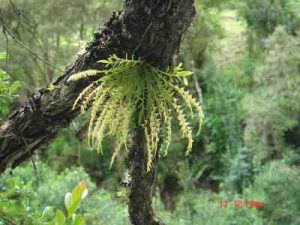 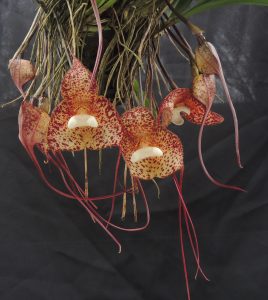 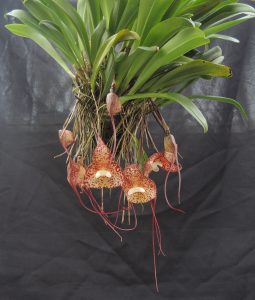 We have a number of Dracula species in the school collection but this is the plant with the largest and most dramatic flowers. The species is native to dense cloud forests in Colombia and Ecuador at altitudes from 1700-2000m. We have seen other draculas growing in Costa Rica where we found plants restricted to wet mossy positions in low light. In common with most draculas, Dracula bella has strongly pendulous flower spikes and so basket culture is important, both to display plants, and to stop flowers becoming trapped in pots.

It took us a while to grow draculas well at Writhlington as we struggled with the plants requirements for baskets and damp conditions. Our baskets dried out and plants responded to heat and drought stress by developing black blotches on their leaves. We initially blamed the black blotches on too much water and so grew the plants dryer – getting worse leaves as a result.

Fortunately, seeing plants in the wild corrected our culture and so we now hang our draculas under other baskets in Cool Americas where they stay wet, shaded and cool and respond with great leaves and a fantastic display of flowers. Dracula bella flowers throughout the year but the current display (above) is the best we have had – perhaps it is time to split the plant?

The flower is a deceit pollinator and mimics a fungus with its strange lip to attract fungus gnats. 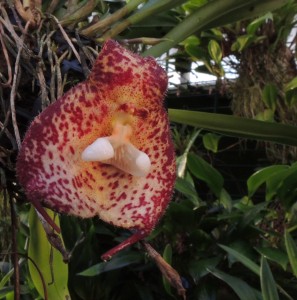