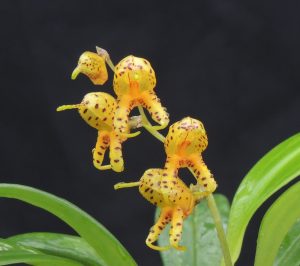 On day 337 we brought you Masdevallia polysticta ‘blue’ and today we have a yellow clone of this variable and small growing species. Native to cool cloud forests in Ecuador and Peru from 1600 to 3000m altitude the species enjoys cool damp conditions and these are shown in the moss that has grown naturally on this plant’s pot. 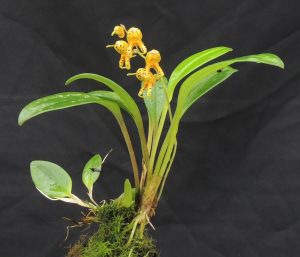 As you can see there is a small restrepia that has grown there too – a rather nice ‘weed’. 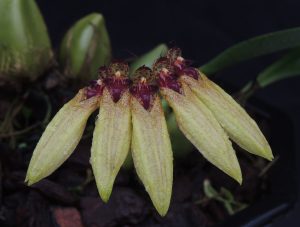 This dramatic species is native to lowland forest in Thailand and Myanmar where it grows as an epiphyte in evergreen trees. The intricate flowers are produces in a terminal semicircular circular umbel like group. This habit is common in a large group of Bulbophyllums once called cirrhopetalums. The large creamy yellow tube at the bottom of the flower is formed from the lateral sepals.

The flowers are fragrant and have a fishy smell which is not unpleasant. 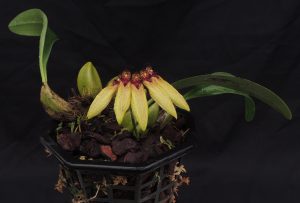 The plant we have in flower is still small and we find basket culture is ideal as the plant can grow out of, and around the basket as it matures.

We grow the species in shade in our Warm Asia section to replicate its natural environment. 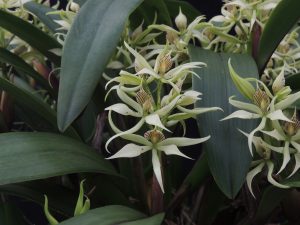 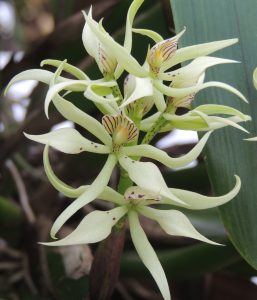 Today the air in the greenhouse is full of the heady scent from prosthechea aemula. This species is native to warm, wet forests over a wide range through Central and South America.

The species is a vigorous grower with 15cm pseudobulbs and 25cm long dark green leaves produced each summer and long lasting sprays of up to nine flowers from each pseudobulb in early spring.

The scent is described by orchid project students as a mix between white chocolate and play-doh and is really rather nice though a little overpowering if you get too close as we have sixteen spikes out on the plant today. 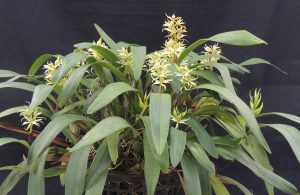 We grow the species in a large basket in warm Americas and it needs very little attention apart from heavy watering. 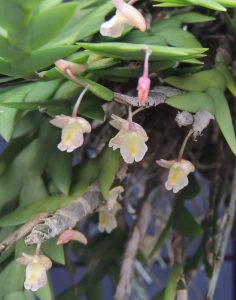 This interesting small growing species native to Papua and New Guinea is another new species for 365 days. We have had the plant for many years and each year it produces short lived flowers over a period of months from its older growths.

The plant has overlapping fleshy leaves that over time fall off to reveal the flattened pseudobulb beneath. 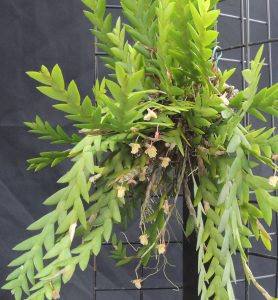 The species is reported as found in lowland swamps and overhanging rivers and in cultivation it seems to really suit mounting so that its stems can fall into their naturally pendulous habit. We grow the species shaded and sprayed daily in our Warm Asia section (min 18C) 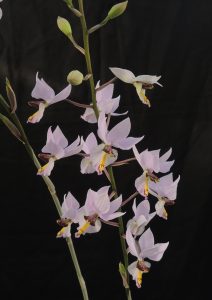 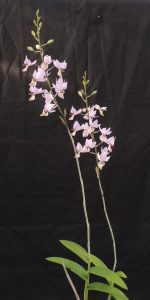 Barkeria whartonia is native to Oaxaca state, Mexico, where it grows in dry deciduous forest either as an epiphyte of on rocks . As a result it produces masses of thick roots that resent being surrounded by damp compost and prefer being exposed to the air. We grow plants mounted and hanging high in our Warm Americas Section (min 15C) where plants are exposed to good light and lots of air. Plants produce thin stems about 30cm long with lush but short-lived leaves and then a branching flower spike that adds a further 80cm to the growth.

With us, Barkeria whartonia starts to flower in December and will still be flowering in March. New growth follow flowering and we water plants every day when in growth.