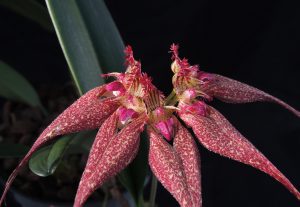 This is a really good week for amazing orchids in our greenhouse and one of the most amazing has to be Bulbophyllum rothschildianum with its large red and pink flowers.

The species is native the Eastern Himalayan region of Southern China, North East India and Burma. I have been to the warm lowland forests of Arunachal Pradesh where the species is found. These forests have a very wet summer when growth occurs but a much dryer winter which is the flowering time. We find the species does well in both baskets or pots but appreciated good drainage and watering regularly even in winter so that the bulbs do not shrivel.

The flowers smell quite strongly of fresh fish (we think mackerel) which is quite pleasant as long as you are expecting it. We presume that the fly pollinators find it irresistible. To get an idea of flower size the pot in the photo below is a 15cm pot. 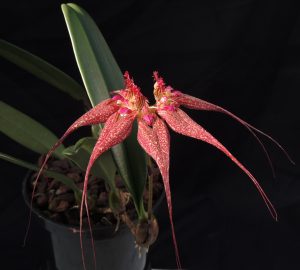 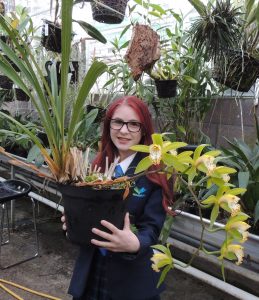 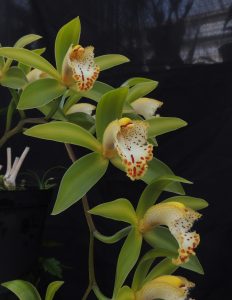 Cymbidium hookerianum is one of our favourite orchids. Its dramatic arching spikes of large brightly coloured flowers are really arresting and as one of Sikkim’s charismatic orchids it is a plant we enjoyed finding in our trips to the Himalayas.

Our largest plant has produced two spikes this year and the first is now fully out in flower. Paige is holding the plant in our photo as she is working with Martha to lead on our link project with the Cheshire Home, Timsbury. Paige and Martha will soon be hosting a visit to the Greenhouse and Mendip Studio School by Cheshire Home residents and in the longer term will be helping the Gardening group at the Home to develop their own orchid collection. The girls are particularly keen that Cymbidium hookerianum should be the flagship species for the project.(more of this story later in the year)

Cymbidium hookerianum is a really cool growing species and we have seen it in Sikkim from 1500-3000m altitude. We have observed that plants flower profusely on dead trees suggesting that the species benefits from additional feeding during the growing season as well as good light. We grow the species in our Temperate section with a winter minimum around 6C which the plants relish. In our experience the species will grow warmer but will not flower as reliably.

I heard people today describing this time of year as miserable but I had to disagree – with Cymbidium hookerianum in flower this time is full positively joyful. The flowers also have a nice scent described by one of my pupils this week as “green”. The large flowers are pollinated by large bumble bees.

Another positive for the species is the name. Hookerianum honours Joseph Hooker, one of Britains great exploring botanists. If you haven’t read Hooker’s Journals I highly recomend reading them, and then exploring Sikkim for yourself. 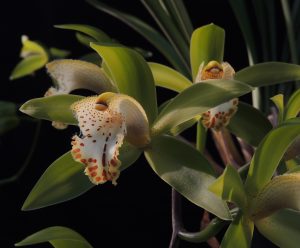 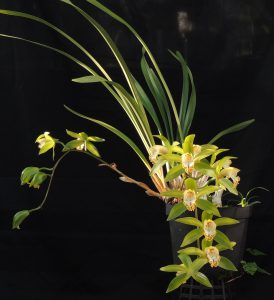 As you are probably aware we sowed 500,000 seeds of this species on January 4th and we hope to have seedlings available for sale in about eighteen months. 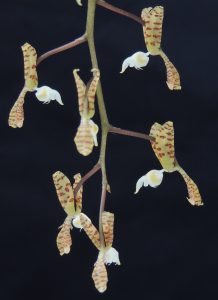 We are convinced that this is the cutest gongora species. Gongora dressleri is a small plant that produces long pendulous flower spikes with attractive flowers covered in spots and stripes and with a white lip. These are the smallest flowers in the genus but they are very graceful and demand a close inspection which reveals a lemon yellow spot on each side of the lip. 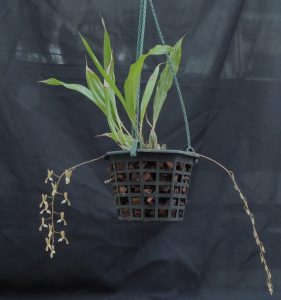 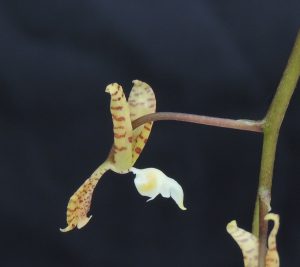 The species is found in Costa Rica, Panama and Colombia and according to Tallis (who is good with scents) the fragrance is similar to hyacinths.

We have another clone (below) which is more heavily spotted than the clone (above) in flower today but otherwise very similar. 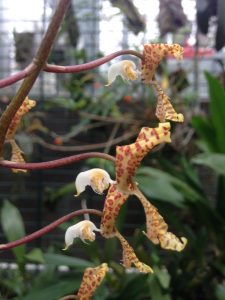 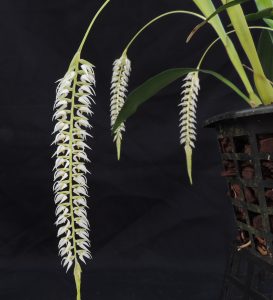 One of our star orchids this week is this fragrant orchid species is found on several islands in the Philippines. Dendrochilum glumaceum is restricted to mossy mountain forest and exposed summits where it is exposed to heavy rain and frequent mists and this determines our culture of the species.

As with any epiphyte evolved for mossy trees the key to successful cultivation is heavy watering especially during the growing season which with us is from February until about August. 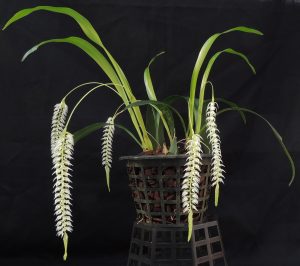 The flowers are produced from the centre  of come the new growths in the spring and fill the greenhouse with scent. The flowers are long lasting and open slowly from the top of the thin spikes downwards. We avoid spraying the flowers with water to avoid damaging the thin petals which appear crystalline and translucent when seen in close up. (Photos below taken by Ben) 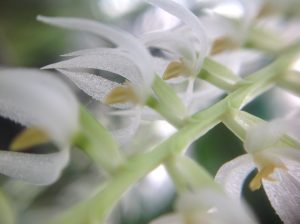 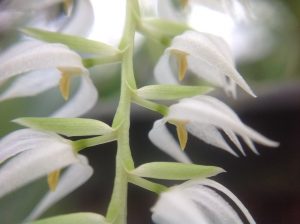 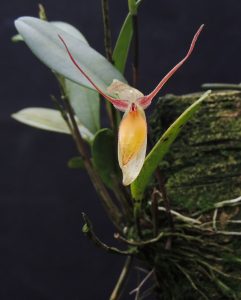 Another new Pleurothallis for 365 days is this rather odd species found from Colombia and Venzuela down to Peru. It is a small growing plant (the leaves and stems are currently 10cm long in total) that produces infrequent large solitary large flowers – this one is 4cm across and 5cm from top to bottom. The name means half-red pleurothallis but our plant has hardly any red and its colouring is rather more reminiscent of a poached egg!

The plant is found in wet forest from 500-2100m and so it is at home in Cool Americas and it will be interesting to see how it develops into a specimen. A plant with many flowers our at once would be quite a sight.