Is Coelogyne cristata the best house plant for a cool windowsill? 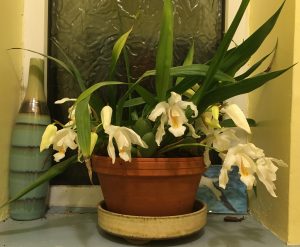 Waking up this morning I was treated to this wonderful sight in my bathroom. This Coelogyne cristata has spent the last four years living on this small East facing window and is clearly a very happy plant. I can now look forward to over a month of these wonderful white flowers. When out of flower the species has attractive leaves and shiny green pseudobulbs – It makes me wonder if Coelogyne cristata is the best house plant for a cool windowsill?

To grow the plant well I water well throughout the year – but I am careful not to wet the flowers – with weak feed throughout the spring and summer. I repot every two years.

We have young plants available at the shop that should flower in 12 months. 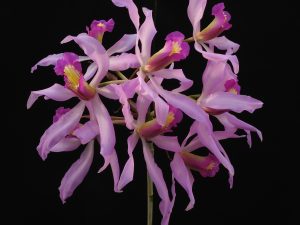 Laelia superbiens is a real monster with mature plants several feet across and large flower heads on 2 and 3m long flower spikes.

We have split our large specimen plants and this is the first flowering of the divisions. The very large flowers are 12cm across and bourn in clusters of up to 20 flowers on long stiff flower spike (2m high in this young plant – see photo with 1m rule)

The species is found in Mexico and central America as an epiphyte in open Oak forests or a terrestrial on cliffs. It grows at around 1200-1500m altitude and so is cool growing and we grow plants in our Cool Americas section (min 12C) in baskets for good drainage.

The pseudobulbs are also enormous with thick leathery leaves – a fantastic orchid. 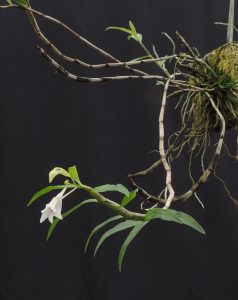 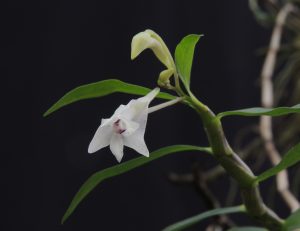 Some of our orchids are very regular in their flowering and this little dendrobium is a reliable February flowerer. We are entering the spring peak for the flowering of many of our cooler growing species and it could be possible not to fully appreciate this little gem.

Dendrobium malvicolor is a small growing species is endemic to Sumatra where it grows from 1550 to 3050m. Plants have small dark pseudobulbs which are thin at the base and thicker near the end where they flower.

We grow the species in our Warm Asia section but in light of the high altitude it would be happy a little cooler.

Like many of our Dendrobiums the species becomes pendulous with age making the species ideal either mounted or in a basket. 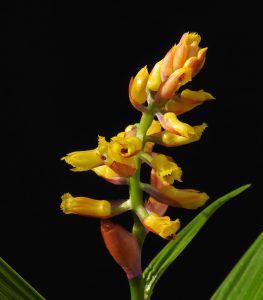 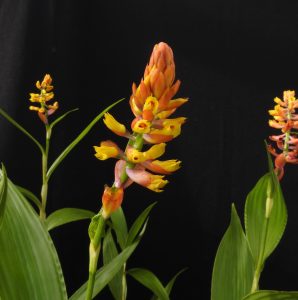 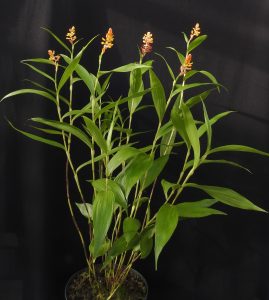 This unusual species is new to 365 Days of orchids. We have had the plant in our collection since the late 1990’s but almost lost it due to under watering about ten years ago and it has taken those ten years to return to this impressive state. Growths are 2-3ft high and all of the two year old growths are topped with an stunning spike of bright yellow flowers, each partly enclosed in an orange and purple bract that gives the spike its dark orange tip. The flowers have purple stripes on the lip and a purple anther cap, adding to the splendour of the species.

Elleanthus myrosmatis is an epiphyte found from Colombia down to Peru in mountain forests from 400-2600m altitude. We have grown the species in a range of conditions and find that it prefers life in our Warm Americas section (min 15C) with plenty of water throughout the year.

In common with other Elleanthus species such as Elleanthus amethystinus (below), which we also grow, Elleanthus myrosmatis is pollinated by humming birds and produces copious quantities of nectar. The individual flowers are fairly short lived but the long spikes keep flowering for several weeks. 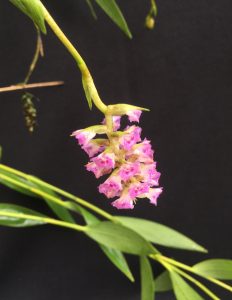 We hope to produce viable seed from this flowering as we feel that this species should be more widely grown, it is less unruly than many of the genus with attractive stiff flattened stems and broad leaves. 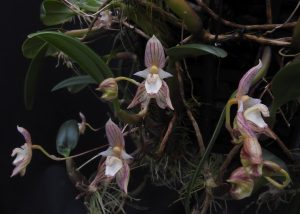 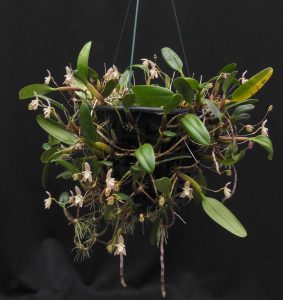 We have a rather special orchid for our 1500th orchid of the day. Bulbophyllum ambrosia has beautiful, fragrant, long lasting flowers and is straight forward to grow. 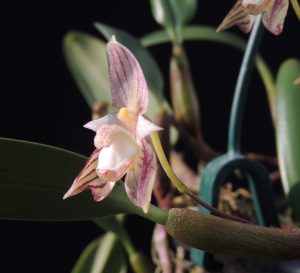 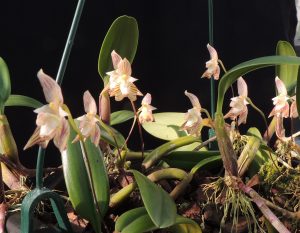 This wonderful bulbophyllum is making a fantastic display this morning with over 100 flowers and buds and is one of our most fragrant orchids with a wonderful scent of sweet warm honey.

Bilbophyllum ambrosia is a very pretty species that produces masses of single flowers on very thin stems so that they appear to float around the plant. The species is native to Southern China and Vietnam where it grows in lowland evergreen forest, and we find it does well in our Warm Asia section kept shaded, and watered, throughout the year. We have visited the habitat in Laos where there is a distinct winter cool, dry season and in cultivation the naturally cooler greenhouse temperatures from November to January do the trick and initiate the abundant flowering. A real treat on a grey February morning.

The species has a potentially straggly growth habit with a few cm between each bulb and so it is well suited to a basket of open bark mix where it can be tied back into the basket as it grows and it soon forms a ball covered in flowers.