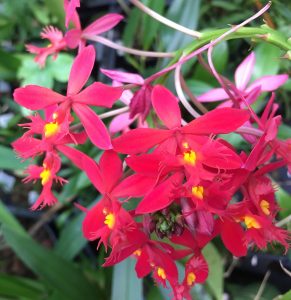 Some orchids are always in flower and Epidendrum radicans is one of them. I have heard it described as straggly as it climbs its way around the greenhouse but I would not be without it. 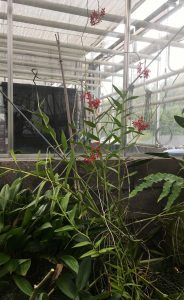 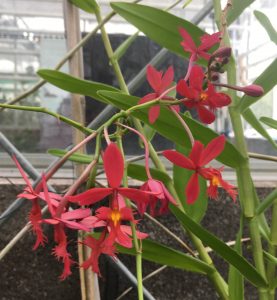 We have seen the species growing in Costa Rica in wet secondary forest at around 1400m altitude where the plant starts life at or near the ground and then scrambles up through the scrub. It has an interesting habit of developing twisting flower spikes that cling onto surrounding plants both in the wild and in cultivation. The flower spike shown here is well away from the pot it was once in and provides an unexpected and welcome burst of colour amongst neighbouring plants. On the downside, Epidendrum radicans produces lots of roots and these can take over nearby pots.

Epidendrum radicans grows long canes up to 2m long with terminal flower spikes. The flower spikes continue to produce flowers for more than twelve months and at any time they carry 10-15 really attractive flowers that are bright scarlet. The species is butterfly pollinated.

We grow plants in our Cool Americas to replicate the conditions we found in its Costa Rican home. 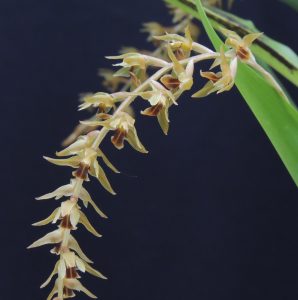 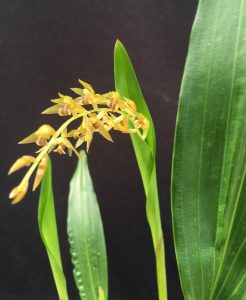 We have the delicate flowers of Dendrochilum oxylobum for you today. 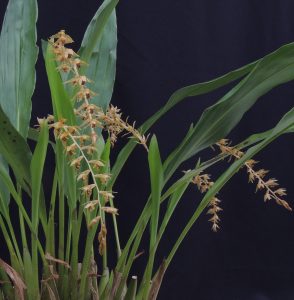 We will be attempting to pollinate it later today, and if successful the seed will be heading back to its home range for work in the schools of Kuching.

The species is found from 400-900m and so it is very at home in our Warm Asia Section with a minimum of 17C where it does really well in baskets with lots of water. 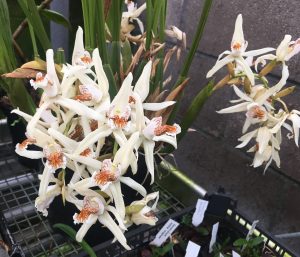 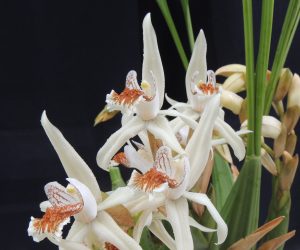 Another of our Sarawak species to start the new week, and we had the enormous pleasure of seeing Coelogyne asperata in the lowland forest of Gunung Mulu national Park.

Coelogyne asperata is a wonderful large growing Coelogyne species found from Malaysia to New Guinea and the Philippines. The stiff ridged leaves are 90cm long on top of stout pseudobulbs and the dramatic 8cm flowers are produced on arching spikes from the centre of the new growths in summer. This Year our plant has five spikes 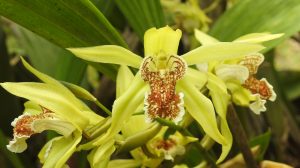 The plants we saw in Sarawak were very similar to our own plant but the flowers were a sulfur yellow rather than the creamy white of our plant. It would be interesting to know how much of regional variation there is over its wide natural range.

The species grows in warm forests in shade up to 2000m and really seems to enjoy growing warm and wet in our Warm Asia section.

There is a lovely record of a plant in Borneo being pollinated by a large flower beetle here and as mentioned it does have a sweet spicy smell.

This is certainly not an orchid for a small windowsill but it has a grand elegance that warrants the space it occupies in our greenhouse. 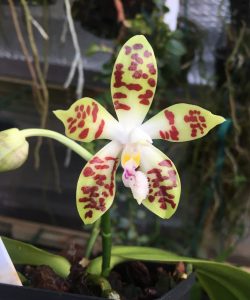 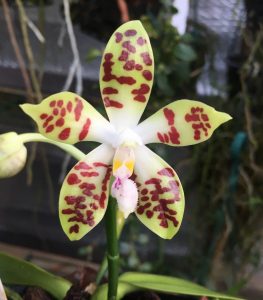 The third in our trio of Phalaenopsis species is Phalaenopsis sumatrana. This species, as its name suggests, is found on Sumatra but is also native to Borneo and the Malay Peninsula and the Philiuppines. It grows in warm lower montane forest (the forest you find in low hills or the lower bits of mountains) from 600-700m – just the kind of forest we walked through in Sarawak on the way up Mount Santubong, Mount Pue and Mount Singai – so we know the habitat – tall evergreen forest with lots of rainfall throughout the year.

Not surprisingly we grow it warm (min 19C) and shaded – a little flower that takes our minds back to some of our favourite places. 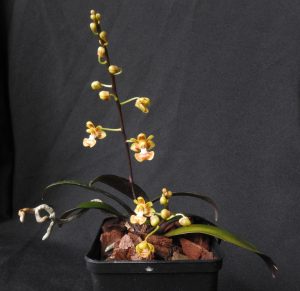 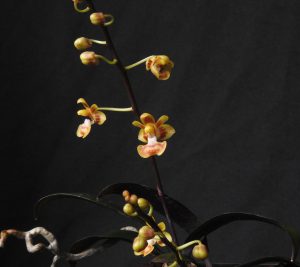 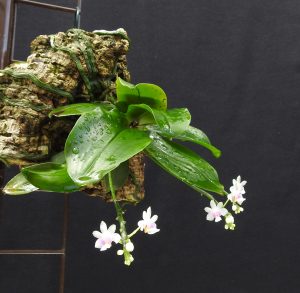 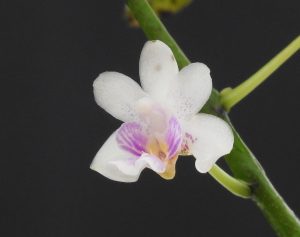