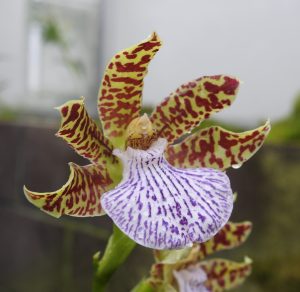 It is a really wet morning – great for filling our rainwater tank after quite a dry winter. Out of the weather the greenhouse air is sweet with the scent of Zygopetalum. 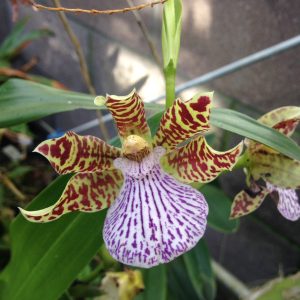 We have seen this Zygopetalum maculatum growing in Brazil at around 1200m altitude in road banks in the mountains and as a terrestrial in grassy and scrubby areas like that shown below. Here it is not really growing in soil but a loose mix of leaf litter and moss. Its scent is to attract euglossine (perfume gathering) bees just as Gongora species do. 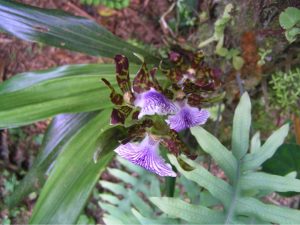 In cultivation Zygopetalums can suffer from black marks on the leaves. We believe that this is environmental and we avoid the problem by growing the species cool and damp to avoid heat stress to the soft leaves and including calcium in our rain water feeding regime. Notice the beautiful leaves on the wild plant in its cool damp habitat.