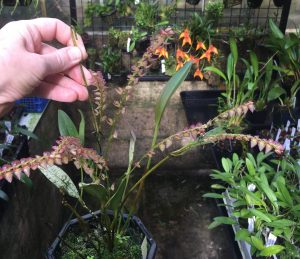 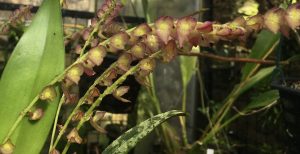 We have an orchid today that demonstrates a common phenomenon in orchids where the amount of sunlight buds and flowers receive alters the colour of the flowers.

Stelis pupurea is one of our larger stelis species and a very graceful with 40cm flower spikes. Stelis purpurea has small creamy flowers with a picotee edge of red which is very attractive on the buds and the flowers. With us the species flowers in the winter and early spring. January flowers are always very pale, Photos 3 and 4 above, while February flowers have a lot more red (photos 1 and 2). The name suggests that the flowers should be dark red or purple, and we wonder how our plant’s flowers would look if exposed to bright light of summer.

The native habitat of the species is grassland and the terrestrial nature of the species explains the long flower spikes which push up through the grass to attract their pollinator.

Our plant came from the nursery Ecuagenera and their website shows the species growing in habitat in presumably very good light and the red picotee edge to the flower is much more marked. (below)

Stelis purpurea is reported as being found from Costa Rica to Peru and from 150m-2900m which sounds rather unlikely as this is a very broad range of habitats. It seems probable that the name is used for more than one species with purplish flowers but our version of the species is a lovely thing whenever they flower.