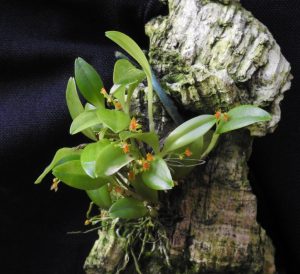 We have some very dramatic large flowered orchids coming into flower over the next week (keep watching to see some amazing sights) and it is sometimes easy to overlook some very tiny but very beautiful species. This orange flowered species is a good example of orchid flowers that reward a close inspection.

Regulars will know that we have lots of very small flowered orchids but this tiny orange flowered species from South and Central America is an extreme case of miniature.

Platystele stenostachya is a mini-miniature found all the way from Mexico in the north to Peru in the South. The flowers are star shaped and dominated by the relatively large orange lip. It has been reported from sea level up to 1700m and with such a range is not surprisingly a variable species in terms of flower colour and shape. Our plants have tiny golden star like flowers with a deep orange lip. The species is almost always in flower and a really interesting addition to any collection. 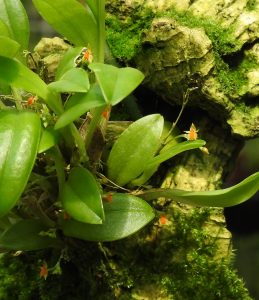