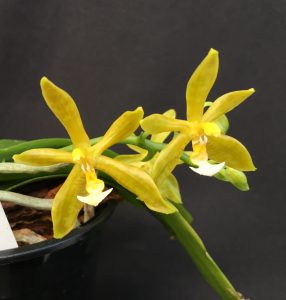 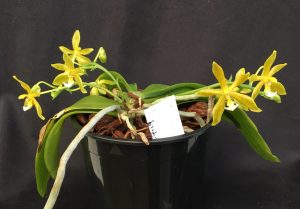 We have a himalayan Phalaenopsis species for you today. This is the variety of Phalaenopsis mannii with no red pigment, so similar to the ‘alba’ varieties of many species that don’t have a yellow flower ground colour.

We also have the normal variety of Phalaenopsis mannii in flower (below) and it is really interesting to compare the two.

We have seen Phalaenopsis mannii in lowland forest on several of our trips to the Himalayas, seeing it in Kalimpong, Sikkim and Assam, but we have never come across a ‘flava’ in the wild. It is always a treat to explore the natural variation of orchid species when you come across wild populations, and orchids are wonderfully variable.

The photo I took of the species in Assam clearly shows the natural habitat for the plant. The forest is seasonally dry forest and there is not sufficient rainfall or humidity for moss to grow on the branches colonised by the orchid. This plant is in the lowest branches of a large evergreen tree where light levels are quite low and it is protected from extreme desiccation in the dry season. The photograph also shows the very extensive root system this massive plant has developed over time (it must be at least twenty years old) and this will store a lot of water during dry periods as well as collecting a lot of water when it does rain.