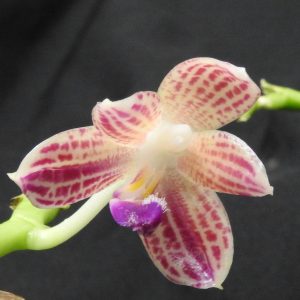 This small flowered but very colourful Phalaenopsis species is, as its name would suggest, from Java and is endemic to the Island where it was once found in warm evergreen forest from 700-1000m altitude. The flowers are 2.5cm across and produced successively on flower spikes in ones and twos over several years. A mature plant will have several flowering spikes and so produces a good show.

Sadly this lovely species was declared extinct in the wild during the 1970’s as the last plants were stripped from a tree on a plantation, highlighting the threat to many orchid species from habitat loss and collection from horticulture. We are doing our bit to maintain the species in cultivation with seed collected this week from last year’s flowering and more pollination to follow.