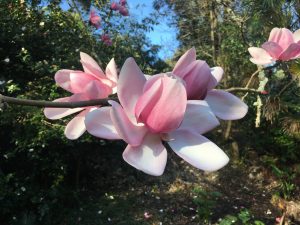 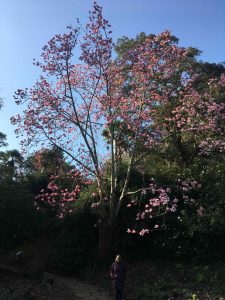 I had the wonderful pleasure of visiting Abbotsbury Subtropical Gardens at the weekend and seeing their magnificent Magnolia campbellii.

During our orchid travels in Sikkim we have seen Magnolia campbellii in its natural habitat at around 3000m amongst silver fir and rhododendron forests. It is a large tree with enormous cup and saucer like flowers. In the wild we found the species to have predominantly white flowers although there are also pink forms such as the tree at Abbotsbury.

There is great history to this tree. The species was described by Joseph Hooker from plants he found in his Sikkim travels in 1855 and it was quickly recognised as a remarkable tree although attempts to grow it in the UK were initially unsuccessful. Seed did not survive the journey home from Sikkim and not until live plants were sent from George King at the Calcutta Botanic Garden that the tree survived in the UK.

The first record of flowering in cultivation is in the 1880’s and the Abbotsbury specimen was one of the first in England in 1900. It is a joy to see this tree still flourishing and the mass of flowers highlight the special microclimate the Gardens offer. The early flowering of Magnolia campbellii make the buds and flowers very susceptible to frost damage  and so specimens are only found in the mild spots of South West England.

If you can make a trip to Abbotsbury the tree will be flowering for a while yet and it is well worth the visit.