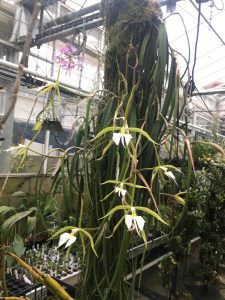 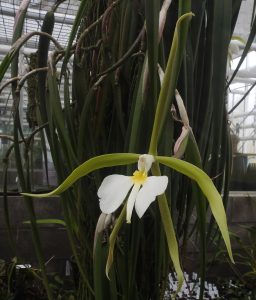 One orchid that we really hope will form part of our display the RHS Orchid Show at Wisley at the end of March is this dramatic Central American species with gigantic moth pollinated flowers.

Epidendrum parkinsonianum is a species we are particularly fond of, since finding it in the volcanic mountains of Costa Rica, and over the past 20 years, growing this wonderful specimen in our Cool Americas Section. The large white flowers are pollinated by large Hawk Moths and the flowers are fragrant at night. 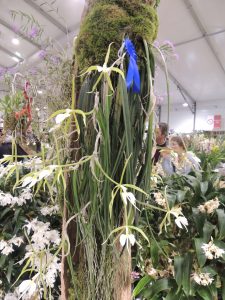 In Costa Rica we found the species in the forests clothing the Poas volcano, where it grows at around 1200m altitude, hanging on the trunks and main branches of trees near rivers. The forest here is cool and wet, and the plants growth habit means that it grown in quite deep shade.

This habitat surprised us as we had previously assumed from the thick terete leaves that it needs a dry bright environment. Moving the plant into cool shady conditions in our Cool Americas section (minimum 12C) in 2007 has resulted in much better growth and heavy flowering. We keep the plant damp throughout the year.

Interestingly we have another clone which is quite different with shorter leaves and smaller flowers. We have found that this clone prefers to grow warmer in our Warm Americas section, which is also brighter. Perhaps there are distinct populations of the species in Costa Rica evolved for slightly different climates.

Look out for this plant if you are coming to the Wisley show.