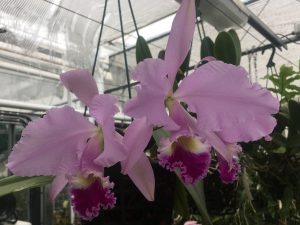 Cattleya warneri is another Brazilian species and like Cattleya purpurata is  a unifoliate cattleya (one leaved). It has very typical cattleya flowers which are large and frilly. The plant is however much smaller that Cattleya purpurata.

The species is endemic to Brazil where it is found as an epiphyte in warm forest on the Atlantic coast. The plants have stout relatively short club shaped bulbs and these produce really big flowers. The flowers photographed are 20cm across.

The leaves of this species can go a yellow colour if grown too bright in the summer and so we hang the species a little lower in the greenhouse (Warm Americas) than some of its relatives.

We are off to look for native British Orchids later today in a school safari to Cley Hill near Warminster – we will bring you some photos later – no Cattleyas expected but hopefully five chalk downland orchid species.