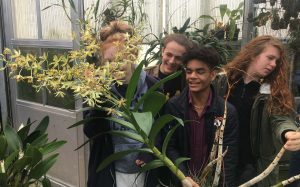 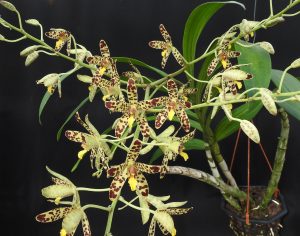 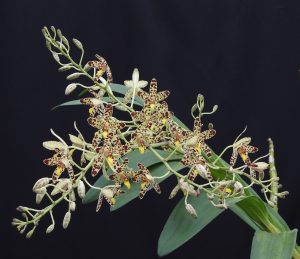 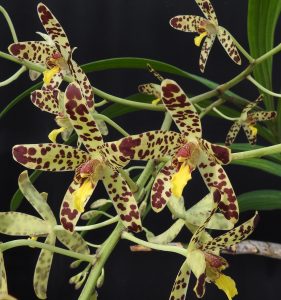 Today our students have been enjoying our wonderful Ansellia africana. This wonderful plant is a star of BBC’s Green Planet episode one – so do pop over to BBC iPlayer and watch last year’s flowers dance as they open (it is at the end of minute 4).

Seeing this orchid flowering reminds me of our wonderful trips to Africa where this species is appropriately known as the Leopard Orchid.

Ansellia africana, the Leopard Orchid, is found right across tropical Africa from South Africa in the South, where we have seen plants growing in coastal forest near Durban, to Uganda in the North.

This is a large plant (shown well with our Year 11 students) and is a clone which we raised from our own seen in the school lab. With 1m long pseudobulbs, 70cm branched spikes and hundreds of flowers we have never seen a clone as good.

The seed was a cross between the dark form of the species and a lighter spotted one. The seed was sown by students in 2004 and the plant was sold at the Eden Project in-vitro in October 2006. It then spent nine happy years with its owners in Cornwall before outgrowing the available space. It was donated back to Writhlington where it was clearly delighted to be home filling Warm Americas with its lovely spotted flowers during February, March and April and winning a number of awards including a cultural certificate from the RHS.

Plants are huge, with 1m long pseudobulbs that produce 70cm branched spikes and hundreds of flowers. We have never seen a clone as good as this one which was a cross between the dark form of the species and a lighter spotted one.