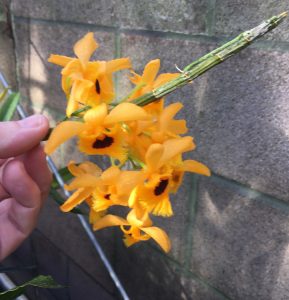 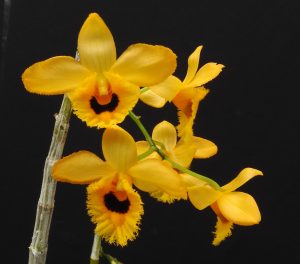 March wouldn’t be March without Dendrobium fimbriatum flowering both in our Warm Asia section and in the foothills of the Himalayas.

Dendrobium fimbriatum is an orchid we have seen growing abundantly in Sikkim and Arunachal Pradesh in semi-deciduous trees in warm lowland forests up to about 1000m. In the wild it makes large dramatic specimens. 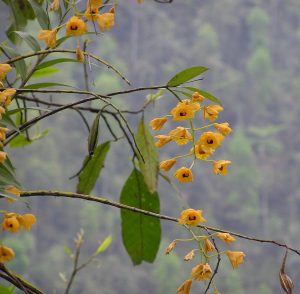 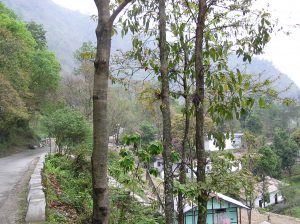 The photos above show it flowering a tree next to the main road to Gangtok not far from the River Teesta at about 400m above sea level (It is in the centre of the photo half way up the middle tree). The habitat here is semi evergreen forest with a distinct dry season.

Flowers are produced in small sprays of about ten flowers from along the leafless pseudobulbs from two to five years old (so don’t cut off old bulbs until they are completely dead). Its native habitat is warm and wet in the summer but distinctly dryer in the winter with a significant drop in temperature from the summer and so we find the species responds well to moving to our Cool Asia section (minimum 10C) for a few weeks in January before moving back to its normal spot in Warm Asia (minimum 17C) where it then flowers.

In Sikkim we have noticed that large plants collect a lot of dead leaves in their crowns which presumably provide additional nutrient to plants and we find that the species responds well to lots of feed and water in the summer and quickly grows long pseudobulbs. The thin leaves of the species are attractive to red spider mite and scale insects so keep an eye out for pests.