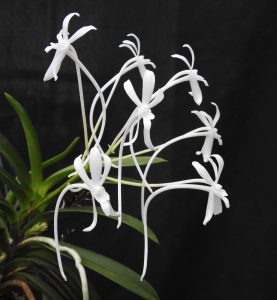 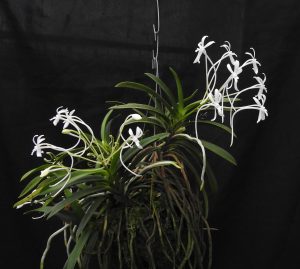 Back in June I featured the unusual pink stemmed variety of this species (below) and promised to feature the pure white form later in the summer. The time has come with our largest specimen plant just opening five spikes of the most sparkling pristine white. 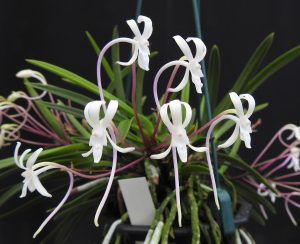 Vanda falcata  is a cool growing orchid from Japan with very fragrant flowers and we grow our plants in Cool Asia in baskets where we keep them wet in the summer and damp in the winter. For us the species flowers from June right through to September and and our large white clone is usually the last to open. We have had this plant growing in its 8cm basket for at least 20 years – not long compared to the centuries that the species has been grown in Japan where Vanda falcata is called Fūki-ran or ‘orchid of the rich and noble people’.

The long spur holds the nectar and the flowers are pollinated by moths. With the flowers so fragrant we not only encourage students not only to breath on the plants, but to have a good old sniff.