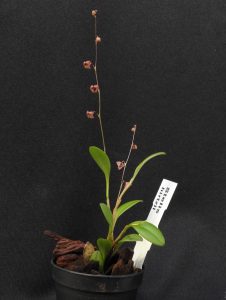 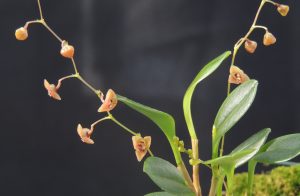 A significant proportion of our orchid species we classify as miniature orchids. ‘Miniature’ is, as Einstein would say, “relative” and so there are miniature orchids advertised that are rather large. When a teenager in the 1970s, working at Keith Andrew Orchids in Dorset, I was excited to be involved in Keith’s breeding of miniature Cymbidiums including the highly awarded Cymbidium Bulbarrow (below). It is a lovely thing and small for a Cymbidium but does not classify at the orchid project as a miniature. 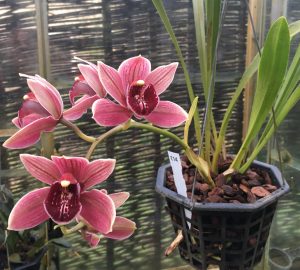 For us a miniature should flower in a 5.5cm pot or similar sized mount and fit in the palm of your hand – Today’s orchid, Stelis Hirtzii comfortably fits this criteria, although like many miniatures can over time become a rather larger specimen.

For anyone interested in miniatures the genus Stelis has a wonderful diversity of species with a general arrangement of many small triangular flowers on muliple flower stems. Stelis hirtzii is a pretty little species native to the cloud forests of Northern Ecuador. The leaves are about 1 – 2cm long and and the flowers are relatively large and very attractive, when looked at closely, with an orange brown ground and bright red stripes on the lip and column. The flowers are loosely spread along elegant upright spikes.