We have another small flowered stelis species today. 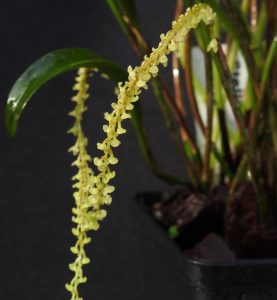 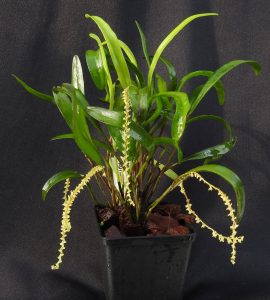 Today we have Stelis aprica – a smaller growing species than yesterday’s Stelis cucullata and with smaller flowers. Other differences include the flower spikes being shorter and more arching in Stelis aprica and the leaves are thinner rather shorter.

Stelis aprica is native to the coastal cloud forests of Brazil that we have explored on our expeditions to the Mat Atlantica in 2000 and 2006 and was one of the first Stelis species I saw in the wild. It grows in wet forest but has relatively stiff leaves compared to many stelis to cope with the more seasonal climate experiences in the Barazilian cloud forests than many of those in from Peru up the Andes to Costa Rica in Central America. This resilience makes the species more heat tolerant and so easier to grow in the UK.

The flowers are small but produced in abundance from old and new leaves, over a long period, giving a lovely display.