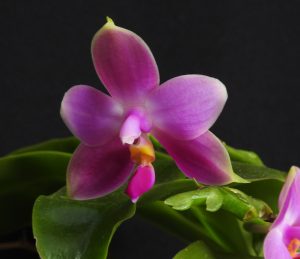 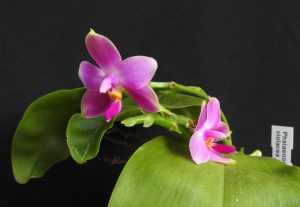 This dramatic Phalaenopsis species is native to Malaysia. The species has been used heavily in the breeding of long lasting colourful hybrids and you can see why. The species produces flowers successively on a spike over many years and so this could appear anywhere in our 365 days but today it is looking particularly lovely.

As the plant matures it produces more and more active flower spikes and so can produce a fantastic display of flowers from several years worth of spikes.

The species is very closely related to Phalaenopsis bellina (below) which is restricted too Borneo and we have seen in Sarawak. 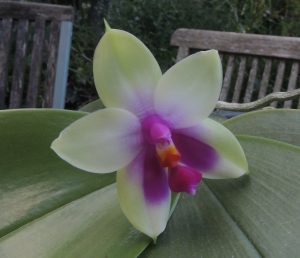 Phalaenopsis bellina was considered a variety of Phalaenopsis violacea when I started growing orchids, and was only separated in 1995 although it is clearly distinct.

The two species give and interesting example of speciation. Both species clearly have a common ancestor but those on Borneo have evolved differently than those in Peninsular Malaysia – in shape, colour and growth habit and most significantly floral fragrance, indicating that they have evolved to suit different pollinators.

Both species are wonderful.