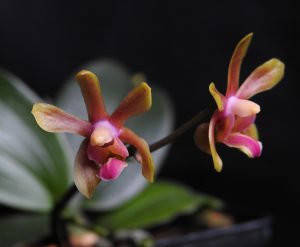 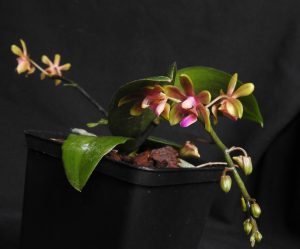 Phalaenopsis taenialis is a miniature Phalaenopsis species. Plants have a span of 10cm and relatively large 2cm flowers on branched spikes that flower over a long period.

We have seen Phalaenopsis taenalis growing in Sikkim at around 2000m in open evergreen woodland with abundant species including Coelogyne cristata and Coelogyne stricta. The species is reported right across the Western Himalayas from Nepal to China and from 1000m-2500m altitude making this a cool growing Phalaenopsis species.

As would be expected with such a large natural range the species is variable in colour through pinks and browns and the brown clones like this one were originally described as a separate species, Phalaenopsis braceana (Actually Kingidium braceanum at the time), by Joseph Hooker in 1890, and that name is still found on plants today.

We grow plants both mounted and in pots and they produce vigorous root systems.