After studying in Canterbury for the past three years, it has been a point of personal embarrassment to me that up until this spring I’d never before seen a wild orchid in Kent. For those new to the blog, I studied at Writhlington between 2010 and 2017 and was part of the orchid project for all but a couple of months at the start, in my time I did travel with the project to see plenty of native orchid species, but given I’ve been living in ‘The Garden of England’ I should have seen some sooner. Also given that I’ve spent the past few months working through spreadsheets and books full of Kent’s native orchid species I really had no excuse this year. These ramblings about my ramblings will be split into two parts, part two will follow shortly.

My first few trips happened in late April, to two different sites looking for some of the earlier flowering species. First up was a trip to the Wye downs, an area of downland just outside the town of Wye. Having seen photos of the Early Purple Orchid (Orchis mascula) starting to flower around the county it seemed like a solid first target. Arriving at the Wye Crown, a site where my research species was previously found, it didn’t seem like the usual Orchis baring sites, having signs of recent livestock grazing. I persevered on however, and a few hours later, having surveyed most of the site with only one suspected orchid (this later turned out to be a bluebell, not my finest piece of identification) it was time to leave. Leaving via the South-West entrance I shortly found myself looking at the entrance to the Wye Downs NNR, it had in fact spent the day looking in entirely the wrong place. This is a theme that would run through a fair few of my orchid trips.

The next day I had higher hopes as I boarded a train to Dover. Having seen a few photos of the Early Spider Orchid (Ophrys sphegodes) in flower on the cliffs around Dover I had identified a site and a landmark that should hopefully make this trip a little more successful. The site in question was the National Trust’s White Cliffs site, directly above the Dover ferry port. Sure enough I found two clusters of about a dozen plants growing right on the cliffs edge, some only a few inches from the edge. These ranged from plants 3-4 inches high all the way down to one that was barely an inch tall. Moving around them and taking pictures was a fair task, having to avoid a few, yellow-green flowers only a couple of inches off the ground, manoeuvring my 6’ 4” frame and size 16 boots around them was no easy task. 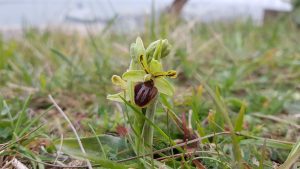 The next week I was determined to head to the correct site at Wye and try and find some Early Purples. Sure enough, heading into an area known as the ‘Devil’s Kneading Trough’, I can only assume this is due to it’s extremely steep slopes. Sure enough, once I was on the correct site, they were not too hard to find. A little delayed on this chalk grassland site compared to the woodland colonies around the county, probably due to the cold winds we were having blow through at the time. 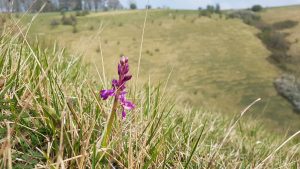 I only managed one trip through May, but I made sure it was a good one. Moving from some of Kent’s chalk grasslands to one of it’s more famous woodland sites. A few miles from Canterbury is the woodland Nature Reserve of Yockletts Bank. I’d planned to visit this site to try and see both the Fly Orchid (Ophrys insectifera) and Lady Orchid (Orchis purpurea), once I arrived it didn’t take me long to tick them both off the list. It’s been a good year for the Lady Orchid in Kent, and this site was no exception, in my short time there I saw a few hundred of them, mostly in  the scrub-like woodland found on site. Ranging from paler coloured forms all the way to a heavily pigmented individual growing in full sun. The plants here averaged around 18” tall with large, robust leaves growing at the base of the inflorescences. 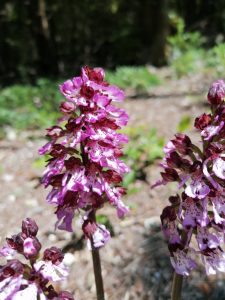 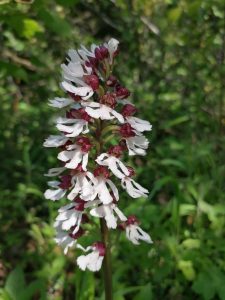 The Flies were a little harder to find, delicate green flowers with the characteristic lip of an Ophrys species. But sure enough they were there in good numbers, much smaller, with finer flower spikes than I anticipated. 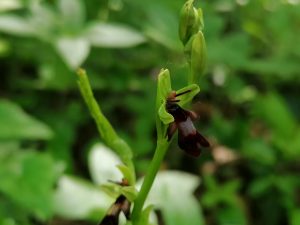 Much more subtle than the maximalist Lady Orchid, but just as interesting, this included one plant with 10 open flowers and still a few buds. The site also provided the almost obligatory Twayblade (Neottia ovata) and a few, lingering Early Purples, as well as a couple of species not yet open, that I would come back to in a few weeks. 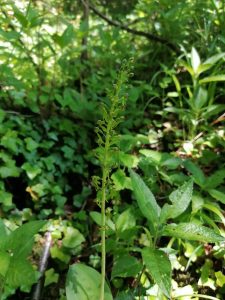