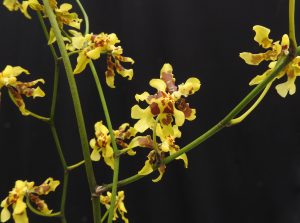 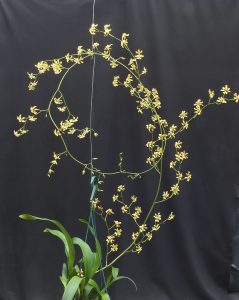 This lovely oncidium makes a real show with its 1.5m long branched spike of pretty flowers. The spike is rather straggly with well spaced flowers unlike close relatives such as Oncidium spaculatum (below) with its upright, densely flowered spikes. 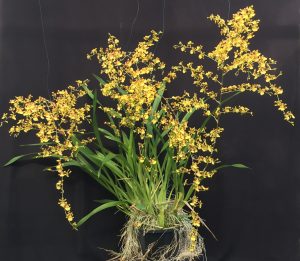 Another difference is that Oncidium pergameneum has much shorter wider leaves, and this together with its long sparsely flowered spike makes it is a rather elegant thing. In the greenhouse the spike finds its way up into the roof and tangles with other plants – clearly replicating the way it scrambles through the canopy of trees in the wild – making it a bit tricky to separate for photgraphing.

Oncidium pergameneum is found from Mexico to Costa Rica in cool forest from 1700 to 2000m but we find that it does best in our warm Americas section (where we grow most of our oncidiums) kept well watered in a basket.