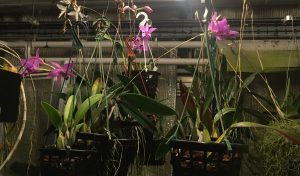 Arriving back at the greenhouse after yesterday’s trip to Bristol University Botanic Garden I was struck by the pink glow coming from our Cool Americas section. The glow was or course the combined flowers of yesterday’s orchid of the day, Laelia gouldiana, and today’s Laelia anceps. 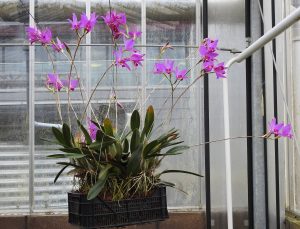 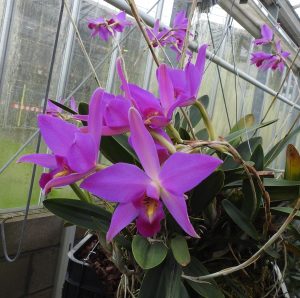 Lealia anceps will be be a real focus of our collection for a while with our different clones flowering from November through to the end of January. 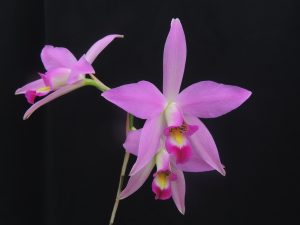 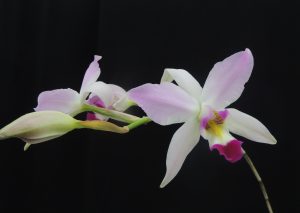 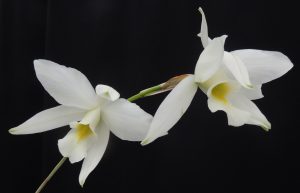 The flowers of Laelia anceps are really variable in shape and colour as shown by the three photos above. The first is a more normal pink clone, the second is the very large flowered and large growing Laelia anceps ‘veitchiana’ and the third is an alba variety that opens greenish and then becomes pure white with a yellow centre to the lip.

The roof of Cool Americas is full of Lealia anceps flowers – very lovely in the darkest months of the winter.

This species is widely reported as being a significant part of the Mexican festival, Dia de los Muertos (Day of the Dead) which takes place at the end of October, but for us, this is a Christmas orchid. Perhaps it is the the climate in the UK or the cool temperatures of our Cool Americas section.

The flowers are large and on strong spikes 80cm long with three to six flowers on a spike. The species is native to Mexico, Guatemala and Honduras where it grows in pine oak forest and coffee plantations from 500-1500m altitude. The wide distribution of the species and its relatively harsh habitat help to explain the ease with which the plant grows in cultivation and its tolerance of both high temperatures in the summer and cool temperatures in the winter. The wide distribution also gives rise to a wide variety of forms.