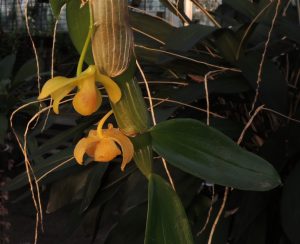 This unusual and rather understated dendrobium species has been in flower for over a month but has been trumped by other species until today.

Dendrobium chrysocrepsis is native to South East Asia and is unusual for both its slipper shaped lip and flat cross section of the spreading pseudobulbs. It has the common name of Golden Slipper Dendrobium. The species grows at 1400m and usually as a lithophyte on limestone rocks, a habitat we have explored in Southern Laos. It produces flowers in ones and twos from older pseudobulbs.

We grow the species mounted but it also enjoys pots until it spreads away from them and takes root in neighbouring pots.

The plant has a spreading habit with regular keikis and this week we will be propagating some of these and increase the golden slippers in our Warm Asia section.