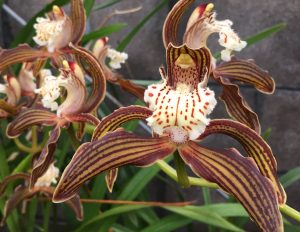 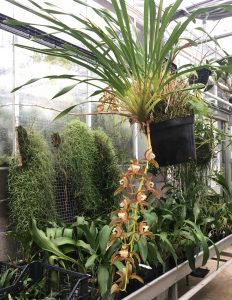 To start Christmas week we have the most scented of our Cymbidium species. 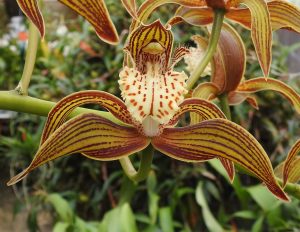 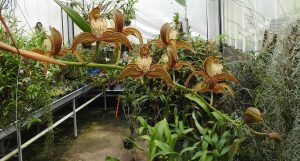 This morning the Cool Asia section of our greenhouse is heavy with the unmistakable citrus scent of Cymbidium tracyanum. The scent is coming from this large plant hanging in the roof. The plant is from seed sown in the 1990s and takes us right back to the early days of the Orchid Project propagation laboratory.

Cymbidium tracyanum is a large flowered and fragrant cymbidium which every autumn sends up spikes up to 90cm long with around fifteen flowers on a spike. The species is native to Southern China, Thailand and Myanmar where it grows in wet forests from 1200-1900m as both an epiphyte on mossy trunks and branches or on mossy rocks.

To replicate the plants natural habitat we grow plants in our cool Asia section (minimun 10C) and keep plants very well watered when in active growth (spring and summer) and damp at other times. Plants would be very happy growing outside from mid May through to September but remember to keep them wet to replicate their monsoon home.

Cymbidium tracyanum forms great specimen plants with multiple spikes. We find the best time to divide plants that need it (particularly if they are crowded with old pseudobulbs in the centre of the plant) is in early spring just after flowering.

We have a few clones including the much darker form (first photo) which we have used as a pod parent for the most recent seedlings out of flask.