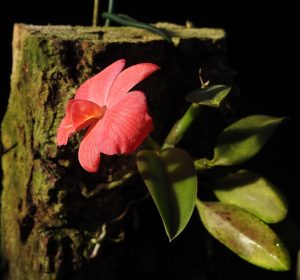 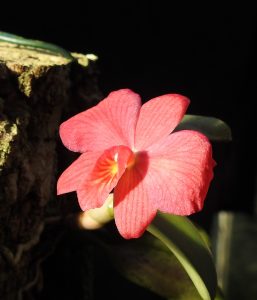 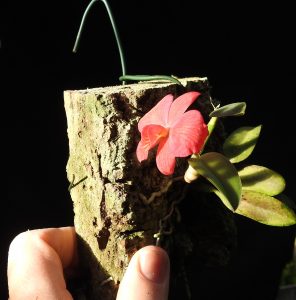 I promised a giant flowered orchid for today and couldn’t resist Cattleya wittigiana whose flower today is only 6cm across but the flower dwarfs the rest of the plant – so definitely a ‘giant flower’.

This species is very closely related to the more commonly seen Cattleya coccinea,  but is pink rather than red. Both were previously included in the genus Sophronitis, a small genus of miniature plants with large dramatic flowers. Including the plants in Cattleya makes sense from both genetic analysis and the ease with which ‘Sophronitis’ species breed with other Cattleya species. 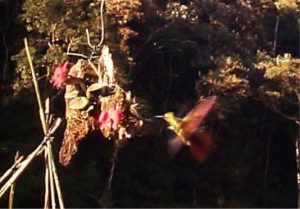 The species comes from similar habitat to Cattleya coccinea and we grow it in a similar way, mounted in good light in our Cool Americas section. Plants are found in coastal cloud forests in Rio State where they are particularly abundant on small trees on exposed mountain ridges (at 1200-1400m) where conditions are cool, bright, wet and windy.