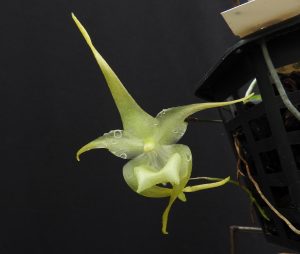 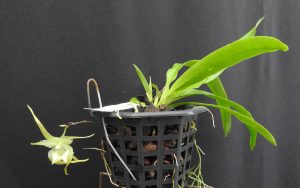 It is wonderful to have our seedling of this interesting species in flower today.

Aeranthes virginalis was described (named) by our good friend Dave Roberts in 2005. He was minded to name it Aeranthes incontinensis in honour of flowers ‘crossed legs’ (lateral sepals) which are reminiscent of someone desperate for the loo!!! what a shame that this name was rejected. The name virginalis was a very good second best 🙂

Aeranthes virginalis is native to the Comoro Islands (between Madagascar and Africa) where it grows in mossy cloud forest at around 600m altitude. We grow the species in a shady spot in our Warm Asia section in a basket. As you can see from the photo, the plant’s repeat flowering flower spike has grown horizontally out of the side of the basket, so it is lucky that we didn’t put the plant in a pot.

It is interesting to note that the flower has a relatively short spur containing the nectar, and interesting research has shown that species that have evolved on islands, like this species, tend to have shorter spurs than related species on Madagascar or mainland Africa, as they have to be more generalist in their pollination strategy with reduced insect species available.