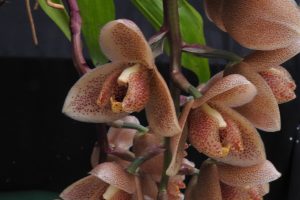 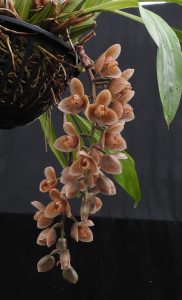 We are very excited that this giant orchid has coincided with filming for BBC Green Planet. Acinetia hrubyana is a real monster of an orchid and with seven spikes this year will hopefully make a real splash on the film when it is released. The flowers are large waxy and really heavy – as is the plant with the BBC having to hire a van especially for the plant.

Acinetia hrubyana is native to warm forests in Ecuador and we have seen similar Acinetia species in Costa Rica growing as massive epiphytes in the lower branches of large trees on the lower slopes of Poaz Volcano.

The plant as I have said is a monster with 70cm long leaves from large ridged pseudo bulbs.  We grow the species in a large basket in our warm Americas section and water it heavily during the growing season in our summer.