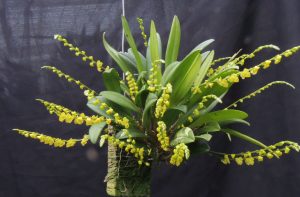 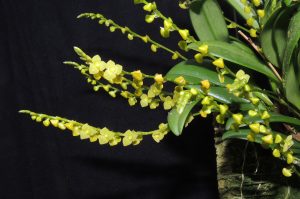 The British Biologist J.B.S Haldane is credited with the observation “From the fact that there are 400,000 species of beetles on this planet, but only 8,000 species of mammals, I conclude that the Creator, if he exists, has a special preference for beetles.” In a similar vein I would note that if the Creator, if she exists, is partial to stelis species – and so are we. In all there are around 500 stelis species, and we have seen several species in situ, in Brazil and Costa Rica on our school expeditions, demonstrating to beauty of these small flowered orchids.

Stelis hallii is a small growing (6cm leaves) but relatively large flowered stelis species is found in cool mossy forests in Ecuador, Colombia and Peru as an epiphyte or lithophyte from 1200 to 3000m altitude. The species is very at home in our Cool Americas section (min 12C) well watered throughout the year. It rewards us with a mass of flowers every autumn and a few flowers on and off at other times throughout the year.