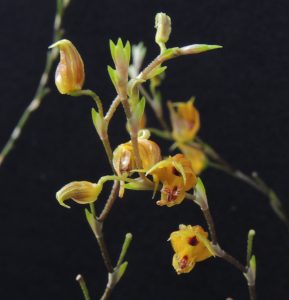 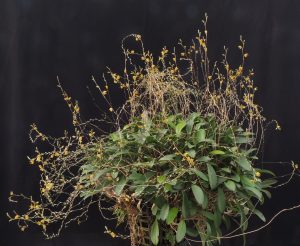 looking around the greenhouse I realised that this species has been flowering for all of the past 12 months but hasn’t featured on 365 days – so today is the day.

The species is native to Colombia, Ecuador, Bolivia, Venezuela and Guyana at altitudes of 1300 to 3500 meters and I have seen it described as a miniature and although the flowers are small grows into a very large plant over time. Our large plant again has over a hundred flower spikes constantly flowering and a froth of flowers surrounding the plant which grows in a basket. Each flower spike lasts three years and slowly gets longer and longer.

We have had the species since 1999 when it was donated by a grower in Devon and it has been in flower every day since – not bad. This plant won an RHS Cultural Certificate at the London Show in 2016 and is always a thing of beauty.

It enjoys being watered well and doesn’t seem to enjoy hot summers which usually result in a bit of leaf drop. It looks its best in the spring with this winters fresh green growth and a fresh crop of flower spikes just starting to flower.