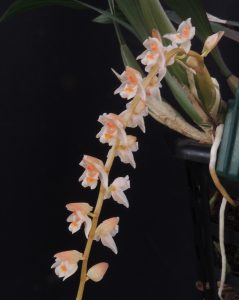 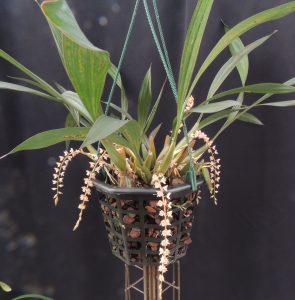 It is flowering time again for this pretty species from South East Asia.

Pholidota leveilleana is a lithophyte native to Southern China and Vietnam where it grows on mossy rocks in deep shade from 800 to 1800m. We replicate conditions by growing plants in our Warm Asia section hanging under a large Dendrobium thyrsiflorum. This species is unusual as its flowers are salmon pink rather than the usual cream and white flowers of the genus.

We have a number of Pholidota speices and in our collection, and we have come across several Pholidota species  in Loas, Sikkim and Arunachal Pradesh. Most species have relatively small flowers but these are often produced in profusion. Plants do however show a lot of diversity in their growth habit with some species small and attractive, and others large and straggly. Pholidota is closely related to Coelogyne, and like Coelogynes there are both warm growing and  cool growing Pholidotas which does make it important to check the native habitat of any species for successful culture.