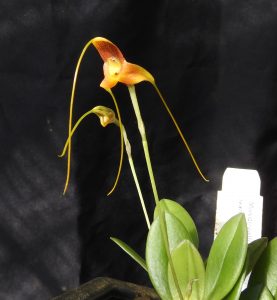 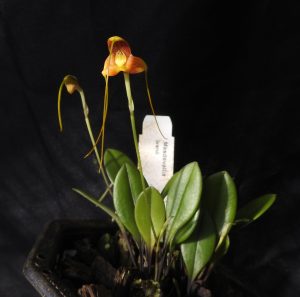 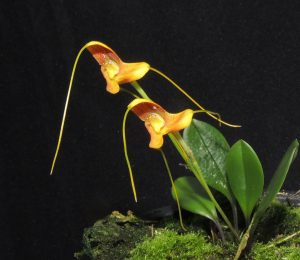 We always have masdevallia species in flower and this week one of the most intriguing is this newly described species endemic to Ecuador.

This species was first described in 2006 and is a small growing masdevallia with large long lasting flowers for the size of the plant (the leaves in the photos are just 4cm long). It is particularly notable for the drooping tail on the dorsal sepal which is unusual and may be an adaptation to prevent pollination attempts by the ‘wrong pollinator. I presume that this species is humming bird pollinated as other orange masdevallias, and we found in Brazil that the local Sopronitis wittigiana was visited by several humming bird species, but only pollinated by the one species with the right beak shape. If like many orchids, this orchid has a specific pollinator species, the drooping tail could get in the way of the beaks of other humming birds while suiting the specific pollinator.

It is found at around 1500m and so is cool growing but not excessively so. It seems to do well with a minimum of 12C but we have found that it really enjoys shade and heavy watering and we have noticed a real improvement in growth since we have found a shady corner that allows us to keep it really wet in its free draining little basket.