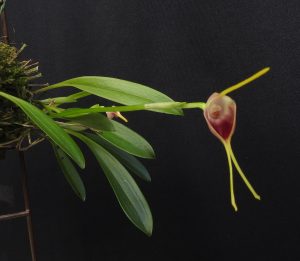 This is the third masdevallia species in three days reflecting the diversity of the genus in our collection and our own interest in the plants. masdevallia infracta is an interesting  masdevallia species and one that holds a special place in our hearts from the time of our first overseas expedition in 2000 to Brazil.

Masdevallia infracta comes from the Mata Atlantica cloud forests of Eatern Brazil where we have seen it growing in the same forests that support Cattleya coccinea (flowering in Brazil below) . On our school expedition to Brazil in 2000 we helped with the relocation of a small population of this species from the underside of a recently fallen tree to nearby locations that may suit continued survival of the plants to set seed and support future generations.

Flowers are produced successively over a long period from the top of the flower stems and so it is important to take care not to cut of ‘finished flower spikes’ that may go on producing for several years. The shape of the flowers and the red colour indicate that it is probably humming bird pollinated, a characteristic shared with Cattleya coccinea.

Our plant grows mounted in Cool Americas in a shady spot similar to the  cool, damp, mossy forests we found the species growing in.