The Bank Holiday weekend has seen several members of the Cattleya family burst into flower, so expect some dramatic species over the next few days. We have several plants of Epidendrum ciliare coming into flower with their spidery green and white flowers. 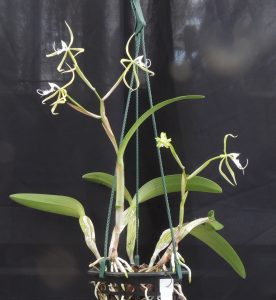 This species is found right through Central America and down through Colombia, Ecuador and Peru. Out of flower it looks very like a uni-foliate cattleya but soon shows it’s unique character when the flower spikes appear. Spikes produce up to six large flowers evolved to attract a moth pollinator although it offers no reward and in common with many orchids relies on deceit pollination. Some interesting research indicates that the species produces a variety of scents presumably to aid with deceit pollination. 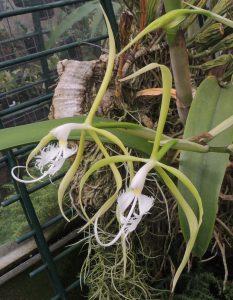 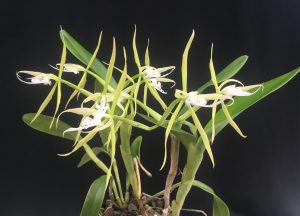 The flower morphology suggests that it is pollinated by large hovering moths as there is no landing platform and the protruding hook at the front of the lip would prevent smaller moths from reaching the nectary.

The species is found high in trees in warm forest from 500-1000m altitude and we find that the plant succeeds well mounted or in baskets of course bark where it can dry out rapidly between watering. In pots we have found it prone to rot in the new growth from being kept too wet. It also enjoys bright light.