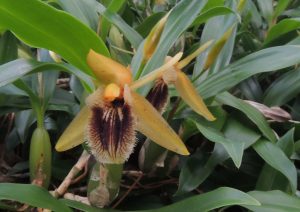 As well as autumn Cymbidiums from the Himalayas we have several impressive autumn flowering Coelogynes in the greenhouse.

Coelogyne ovalis is a cool growing Coelogyne from South East Asia and the Eastern Himalayas. We have seen plants growing on the Bolevan plateau in Southern Laos at around 1200m where they form large clumps in evergreen trees.

This plant forms a fantastic specimen when grown well as the plant shown here was awarded a Cultural Certificate from the Royal Horticultural Society in November 2016 at the British orchid Congress. This year the plant is twice the size and over a metre across.(see photo below). What a shame there are no shows on. 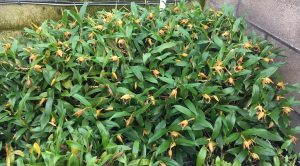 We grow the plant flat on a large slab of cork bark and water it heavily throughout the year to grow fat pseudobulbs that flower successively for about two months. Our advice is never to let bulbs shrivel

The flowers seem to be very attractive to autumn wasps that presumably enjoy the warmth of the greenhouse too.