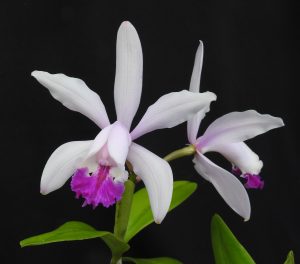 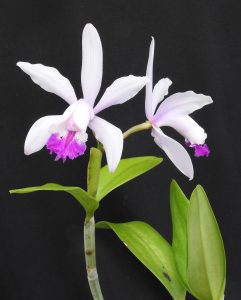 April is a great month for Cattleya species and this is the first flowering of a seedling of Cattleya loddigesii.

Cattleya loddigesii is a bifoliate (two leaved) cattleya species from Brazil. The species grows near the Atlantic coast of Brail from 600-900m and was once common in the swampy forests along the regions rivers including the Rio Grande, Rio Tiete, Rio Pardo. Unfortunately much of this forest is now gone and in Brazil we drove through an area where the species had been recorded which is now treeless low grade pasture.

We have a few clones of Cattleya loddigesii and the species becomes a robust plant, with cylindrical pseudobulbs 40cm high, that produces a strong flower spike between the two thick leaves with up to six large waxy flowers. This young plant has a few years to go to reach its full potential.

We find the species thrives in a basket hanging in the roof of Warm Americas where it gets lots of light and dries out between watering. We have found that plants like to be repotted regularly and resent the compost breaking down or getting clogged with ferns.