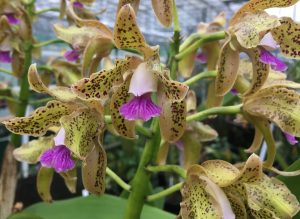 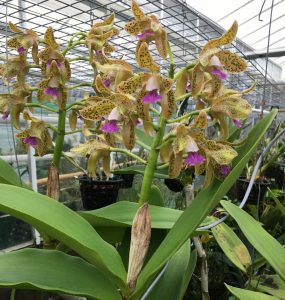 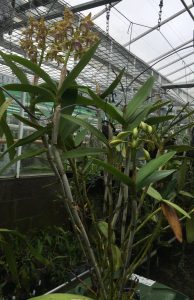 The second coerulea Cattley species this week is this giant Brazilian species.

Cattleya guttata is native to Brazil and can be found in Sao Paulo near the coast. It grows as an epiphyte with warm wetter summers and dryer winters. The plant does all its growing with us between April and September and we water and feed heavily during this period. For the rest of the year we keep the plant dryer but never let it shrivel.

It comes into flower in autumn and the blooms last 8 weeks. This species of Cattleya has longer bulbs than any of the other Cattleya’s that we have as the bulbs are over a meter long and the flowers extend by another 50cm. With three flower spikes each with twelve flowers this year, it makes a stately plant. This is the coerulea variety which has a more blue /purple lip and lighter petals than most clones. We grow this orchid in our Warm Americas section with a minimum of 15 degrees C.

If you have the the space this is a wonderful species to grow. We have seedlings in flask that will be de-flasked later this year.