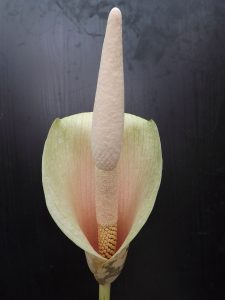 This easy to grow terrestrial Aroid is widespread across sub temperate areas of the Himalayas, including Sikkim, whilst not an orchid, it’s interesting enough to warrant a place on the blog. It’s annual growth cycle is unlike any orchid, entering a winter dormancy where the bulbs can be stored out of any compost and entirely dry for a few months of the year, producing a large single leaf in the early spring, which remains until the onset of the next winter dormancy, similar to the photo below of Amorphophallus konjac. When mature the corm will occasionally produce a large, short lived flower-like structure, botanically this structure is an inflorescense and produces a large number of separate male and female flowers at the base of the enlarged central spadix. These flowers mature at different times, helping prevent self pollination. The ‘flower’ is only open for a few days and carries a strong, unpleasant smell of rotten meat which, whilst one of the more mild fragrances in the genus, is enough to fill the entire first floor of a house, much to my family’s disgust.

This plant is easy to grow, requiring similar conditions to many sub temperate orchids like Disa and Stenoglottis and can be grown outdoors for most of the year, coming in before the first frost as it is not frost hardy, but is happy to grow with warmer orchid collections, although I would reccomend letting it flower outdoors due to the smell. 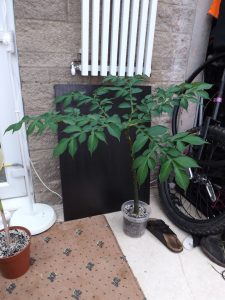